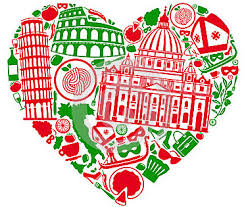 Every October the United States celebrates Italian heritage month. The 26 million Americans of Italian descent make up the fifth largest ethnic group in the United States. However, we all have many reasons to celebrate the best of Italian culture, including the following:

1. Italians defined art and architecture. More than half of the world’s designated cultural treasures reside within Italy’s borders.

4. Italian wordsmiths created la bella lingua by crafting the effervescent Tuscan vernacular into a language so rich and powerful that, as Dante demonstrated in his Divine Comedy, it can sweep readers down to hell and up to heaven.

5. Italian musicians fashioned the original do-re-mi of musical notation, instruments such as the oboe, piano and violin and the language of music (il linguaggio della musica) with terms such as adagio, allegro, aria, concerto, soprano and libretto.

6. Through the influence of books such as Machiavelli’s The Prince and Castiglione’s The Courtier, Italy taught diplomacy and etiquette to Europe.

7. Italian scientists mapped the moon in the 1600s, split the atom and invented the battery, barometer, radio, telephone and thermometer.

8. Italian designers, beginning in the Renaissance, raised fashion to an art. Today designer clothes by Armani, Versace and Prada appear on runways and red carpets around the globe.

9. An Italian patented the first cinematografo—a machine that recorded, developed and projected films—and invented the forerunner of all panoramic projectors.

10. Italians created the cuisine that the world loves best. Pasta, with pizza a close second, has conquered more people in more countries than any dish from any other country.

How did a boot-shaped peninsula smaller than California make so many enduring contributions to Western culture? In his fascinating  book, Italianità: The Essence of Being Italian and Italian-American, William Giovinazzo suggests that the answer lies within the Italian soul: