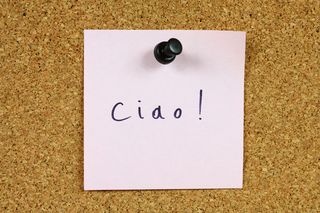 Italian won me over at first "Ciao!" Over the last quarter-century, I have devoted countless hours and effort—enough, if applied to more practical pursuits, for the down payment on a villa in Umbria—to the wiliest of Western tongues. I have studied Italian in every way I could find—from Berlitz to books, with CDs and computer drills, in private tutorials and conversation groups, and in what some might deem unconscionable amounts of time in Italy.

Such passion is nothing new.  “In our present times,” observed the Florentine playwright Giovan Battista Gelli in 1551, “many diverse people of intelligence and refinement, outside Italy no less than within Italy, devote much effort and study to learning and speaking our language for no reason but love.”

Why fall in love with this luscious language? Here are the first five of my top ten reasons:

1. Italian is “beautiful, fun and sexy.” That’s how people perceive Italy and its language, Stephen Brockman, a professor at Carnegie Mellon University, observes in an essay called “In Defense of European Languages.” “Why not?” he adds. “I can’t see anything wrong with that.” Neither can I.

2. No other language is more romantic. All the Romance languages evolved from the volgare (vernacular) of ancient Rome Yet none may have so many seductive ways of expressing amore: Ti amo, mio tesoro (I love you, my darling) for l’amore della tua vita (the love of your life). Ti voglio bene (for all others). Voglio soltante te (I want only you). Vieni qui e baciami (Come here and kiss me.) Ti adoro (I adore you).

4. You can use your hands—a lot! In Italian speaking without gestures is like writing without punctuation. Hands become commas, exclamation points and question marks. Who even needs words when a tug at a bottom eyelid translates into "Attenzione!" ("Watch out! Pay attention!"), a straight line drawn in the air as “Perfetto!” and fingers flicking upward from the neck past the tip of the chin as "Che me ne frega" ("I don't give a *&#@!").

5. Italian has become the new French. With only an estimated 60 to 63 million native speakers (compared to a whopping 1.8 blilion who claim at least a little English), Italian barely eclipses Urdu, Pakistan’s official language, for nineteenth place as a spoken tongue. Yet Italian ranks fourth among the most studied languages—after English, Spanish, and French, which Italian now rivals as a language of culture and refinement.

Dianne Hales is the author of La Bella Lingua: My Love Affair with Italian, the World’s Most Enchanting Language. To enter our Fall in Love with Italy contest, click here. The contest closes February 28.

Italian may be the only language that has inspired una canzone d’amore (a love song). Click below to hear this lyrical tribute: