50 Years of “The Sweet Life” in the Italian Language 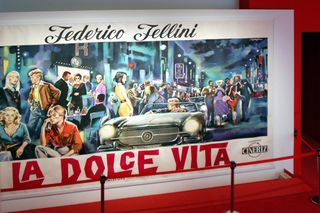 Italy is celebrating the 50th anniversary of its most iconic film with the release of a digitally remastered version of La Dolce Vita. The Gucci fashion house paid for the restoration, which premiered last weekend at the Rome International Film Festival, as a tribute to the movie that “paved the way for a new world with an obsession for style, fashion, and celebrity.”

Its director, Federico Fellini, son of a traveling salesman, was born in 1920 in the seaside town of Rimini. At age 10 he ran away to join the circus. (His job was caring for a sick zebra.) During World War II, he traveled throughout Italy writing sketches for a touring theatre troupe.

After the war Fellini set up a store called the Funny Face Shop, where he sketched caricatures for American G.I.s. He also penned gags for comedians, illustrated comic books, and drafted radio plays. Fellini described himself as “un bugiardo,” a liar—but an honest one. He won eight Oscar nominations for screenwriting in addition to a raft of awards for directing.

“The first thing Fellini said to me was, ‘I need a face with no personality—like yours,’” Mastroianni later recalled. The name Fellini coined for his character, Paparazzo (derived from a dialect word for a large pesky mosquito), morphed into paparazzi, the universal word for celebrity-chasing news hounds.

The movie—with a working title of "Although Life Is Brutal and Terrible, You Can Always Find a Few Wonderful Moments of Sensuality and Sweetness"—captured a vivid panorama of the not-always-sweet life of post-war Rome.

Released in 1960, La Dolce Vita was condemned by the Vatican but won international critical acclaim. Its unforgettable scenes, such as Anita Ekberg’s nocturnal dip in the Trevi Fountain, signature music, and luscious leading man created an image of Italian life that enchanted the world.

Some critics compared this 165-minute movie, with 104 separate scenes, to Dante’s Divine Comedy. Like the 14th-century pilgrim, the errant journalist wanders through a corrupt world teeming with memorable characters—120 named in the script—to emerge into the light of day. Although Fellini’s voyager found neither radiant stars nor any hope of salvation, his film has joined the ranks of immortal screen classics.

Amarcord — the title of Fellini’s semi-autobiographical movie, from a local Rimini dialect word for “I remember” that conveys a touch of poignancy

Grazie a tutti!  Thanks to all of you (tanti–so many!) who entered our "Viva l'italiano! Book Bonanza Contest."  I will announce the winners in my November newsletter.

Click below to see the movie's most famous scene:

← Guest Blog: Growing Up Bilingual in Italian and English The Italian Language on a New York Subway →
FOLLOW BY RSS