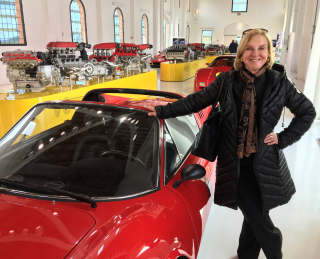 In a sweet season of my journalistic life, I wrote about cars for Parade, the Sunday news supplement, covering fun topics such as the allure of convertibles (decappottabili) and favorite dream cars (auto or macchine da sogno). During week-long test drives, I took the wheel of everything from a sleek Porsche 911 to a baby-blue Bentley. But there was one car I was too intimidated to drive (although I happily went for a spin in the passenger seat): a Ferrari.

Nothing looks, feels or sounds like this Italian stallion. As my driver spun into a sharp curve, I closed my eyes and felt, for a brief exhilarating moment, that I was flying without leaving the earth (volando senza staccarmi da terra). This is exactly what Enzo Ferrari had in mind when he rolled out the first official Ferrari seventy years ago in the town of Maranello, near Modena in Emilia-Romagna.

Earlier this year, I visited the Ferrari museum, which lives up to its slogan of “Fai battere il cuore!” (Make your heart race!)  As I admired dozens of the spectacular race cars (vetture da corsa), the trophies (trofei) they’d won and the champions (campioni) of the Scuderia Ferrari (Ferrari stable or team), I picked up a new automotive vocabulary: motore (engine), volante (steering wheel),  gomma (tire), candela d’accensione (spark plug), tachimetro (speedometer), freno (brake), marcia (speed gears) and freccia (signal). I also learned a few other relevant  words, such as sbandare (swerve, veer), andare/essere in panne (for a vehicular break down) and testacoda (spin-out).

Rosso corso (race red) is Ferrari’s signature color. Just as famous is the world’s most recognized brand (marchio): the Cavallino Rampante (prancing horse). In 1923, as a race car driver (pilota) for Alfa Romeo, Enzo Ferrari met the mother of Count Francesco Baracca, a World War I ace who painted a horse on the side of his planes for good luck. She suggested that he do the same with his cars. Ferrari chose a black horse rather than the original red, set against a background of yellow, the color of his native Modena. The prancing stallion has garnered more prizes (premi), titles (titoli) and track records (dimostrati successi) than any other racing car.

This month Ferrari is celebrating its seventieth anniversary with a Concours d’Elégance of vintage cars at various sites around the world and a “Leggenda e Passione” (Legend and Passion) auction of automobiles spanning the last seven decades, hosted by Sotheby’s at the Ferrari factory on September 9. Bids are expected to soar even higher than the record $38.1 million paid a few years ago for a 1962 Ferarri 250 GTO. That too is enough to fare battere il cuore!

Partire in quarta –- to get off to a flying start, start the race at a maximum speed

Click below for a virtual tour of the Ferrari factory.

← Summer in the Italian Language: A Harvest of Words How Romeo and Juliet Became Italy's Most Famous Lovers →
FOLLOW BY RSS