A Bad Hair Day in the Italian Language 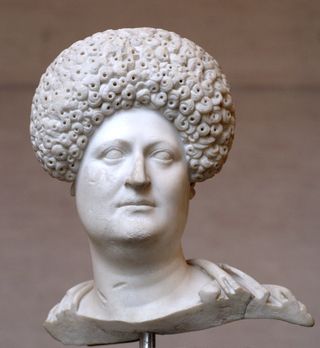 A bad hair day (una giornata storta) is nothing new. Regardless of whether their hair (i capelli) is curly (ricci), red (rossi), dark (scuri), brown (castani), or blond (biondi), women have always obsessed about it. According to Alberto Angela, author of A Day in the Life of Ancient Rome, women’s hair styles were not just fashion statements in imperial Rome but indications of their husbands’ power and their own prestige.

Octavia, sister of the Emperor Augustus, inspired the “Octavia look,” with a little curl in the middle of the forehead, wavy hair around the temples, and a braid that ran around the top of the head in the form of a crest until coming together into a bun at the back of the neck.

Many fashionable women would don a wig (parrucca). Made of real hair, red and blond wigs came from Germany; black ones, from the Middle East and India.

Styles became so exaggerated that women stacked hairpieces on top of one another—“like the rows of seats in a theater,” says Angela—to create an enormous fountain of curls. Often the shorter the woman, the more monumental her hairdo was. (Mine would have been a veritable tower.)

Women’s “big hair” reached unprecedented heights at the peak of the Roman Empire under Trajan in 115 A.D. Wanting to wear their hair “alla Plotina” (like the emperor’s wife Plotina), women created a vertical fan of hair running from one ear to the other. Little curls dangled like earrings at either end. Some women, according to Angela, looked like they were “wearing the back of a chair on their head.”

Once the parrucchiere takes comb (pettine) and scissors (forbici) in hand, pay attention. You might want to give directions, such as:

*porti la riga a destra — part it on the right

If you're pleased with the results, say, “Mi sta bene.” (It suits me). You also can ask for advice with problems such as la forfora (dandruff) and le doppie punte (split ends).

If you have capelli that is grassi (greasy), secchi (dry), or crespi (frizzy), you may feel like mettersi le mani nei capelli (putting your hands in your hair in frustration).  Whenever you’re fed up with something, you may averne fin sopra i capelli (have it up to one’s hair) and become so furious that you have un diavolo per capello (a devil for hair).

That might be enough to far rizzare i capelli (make one’s hair stand on end).

Sometimes the only solution for any brutta giornata, as the delightful song below advises, is "lo shampoo":