A Linguist’s Top Three Tips for Speaking the Italian Language

In this guest post,  a Canadian linguist who has taught Italian and worked in Italy — Madeline Jhawar of Italy Beyond the Obvious – offers some essential tips for becoming fluent. 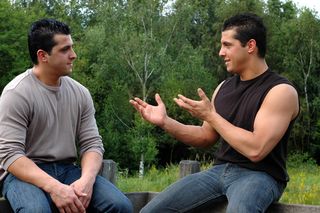 I picked up the following insights, not by studying the structure of languages for my degree in linguistics, but by living in different countries and learning to speak different tongues. You may be surprised to see that I never mention memorizing grammar or vocabulary.

When my husband and I were living in Milan, his future brother-in-law came to visit us from Switzerland. He does not know Italian, but he speaks Spanish, French, German, English and Romansch. He forged ahead speaking to Italians using a combination of a concocted language, gestures and facial expressions. Most of the time (amazingly, we thought) he would make himself understood.

You may not have five languages to splice together, but a few words plus gestures and expressions can go a long way. It's initially hard to override your brain's natural tendency to want to translate word-by-word from your native tongue. However, I highly recommend figuring out how to say what you want to say with the vocabulary you have, however limited it may be. When you realize you can indeed communicate, even imperfectly, you'll start feeling a connection to Italians. If you make connections, you'll care, and if you care, you'll maintain your determination to keep learning their language.

In high school, I took German classes for three hours a week, with a textbook that featured a dog named Lumpy (pronounced loooompy) who did all sorts of things that I really didn't care about. Six years later I went to Germany to work as a tour guide. All of a sudden, people around me were using words I'd memorized but never really grasped. The previously confusing absence of prepositions, replaced with strange noun endings, clicked when I heard them in everyday life. Suddenly German was relevant. And I found myself wishing I'd paid more attention in class.

Even if you're studying Italian in a poorly lit classroom taught by an old priest with bad breath who spits when he talks — as my Latin teacher did — find a way to make a connection to the language. Learn words about subjects you care about, and use Dianne’s blog and book to guide you. Listen to Italian music; watch soccer games or subtitled movies. Read comic books, tourism magazines or even children's books. It doesn't matter how you bring Italian culture to life in your world, just that you do.

After a certain age (somewhere between 12 and 20 or so), it's much harder to learn a new accent well enough to sound like a local. But there are many other sounds in a foreign language that we can copy even as adults. Pay attention to emphasis on the correct syllable of a word; notice the inflection of a sentence; use the language’s version of "hmm" or "um" (“ehhh” in Italian). Drop the pronouns like native Italians do – for instance, say “andiamo” rather than “noi andiamo” for “we are going.”

So how quickly can you become fluent? If you immerse yourself and follow these guidelines, you could gain basic fluency in about three months. And the reason I don't mention grammar and vocabulary? They'll come on their own as you’re focusing on other things.

If you’re thinking of a trip to Italy,  Madeline can customize your travel plans. (See a sample itinerary.)