A Memoir Inspired by a Passion for Italy 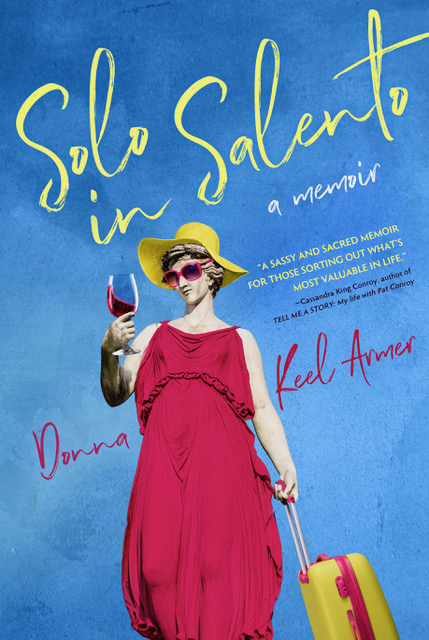 I wrote my autobiography in the second grade. It was the same year my mom bestowed upon me a wondrous red fake-leather diary with lock and key. Every day I filled its pages. But gradually I learned it was easier to perform to everyone else’s music instead of my own. Like Pinocchio I dangled from strings, obeying whomever pulled. I lost myself in the demands of others. My writing life drifted off to sea.

In 1995 on my first trip to Italy, the past I had buried so deep crept closer. Italy yanked the strings, pulling bits and pieces to the surface, pressing me to unravel. Italy called me to reveal myself, but I wasn’t ready. Each successive trip to Italy with my husband nudged me closer to the edge of my past.  But what I wanted most was to return alone, so I created a factious reason to travel solo. I told my husband, family, and friends I was making the trip to collect information for a book I was writing—a book about a rebellious woman and the massacre of 1480 in Otranto on the Salento peninsula in Puglia.

The truth was there was no book. Instead I desired time alone so I could move out of a life haunted by a wretched past, a loss of faith, and toxic relationships. Italy was the place I chose to unravel. If the only way I could get there alone was to lie, I was willing.

In 2012 my lie transported me to the small village of Otranto. There the unraveling began. No one observed the gush of tears in tiny alleyways, on the terrace, or gazing out to sea. As each shadow released, my past washed over me. More and more of my old self died, and my real self, the one left behind in a diary, resurrected.

Daily encounters with colorful characters, lengthy lessons in mosaics, and a rigorous recycling program enriched my life. Tools for sorting and discarding my personal trash fell on my path. By the time I surfaced to return home, I had acquired enough courage to admit the truth to my husband. But the lie about writing a book followed me.

Each day I felt compelled to labor furiously to create words about my heroine and the massacre. I was frantic to turn my lie into truth. When I bemoaned my lack of writing progress to a friend, she said, “Stop writing fiction. Write about you and Otranto. We need to hear your story: How you found your way back to the joy of living. How you discovered your own truth.”

I followed her suggestion. I unlatched my heart. The words flowed. Solo in Salento—the story of my life-changing journey—was born.

If you haven’t been to Otranto, I invite you to walk with me on my last evening there:

“As I ramble down Via Castello for my last passeggiata, my eyes bathe in the evening’s hush. Birds snuggle in their nests with last bits of tweets and twitters, aromatic whiffs of  rosemary float on the tender breeze, benevolent laughter circles, and the music—always the music. It moves with every breath, lifting a single drumbeat of strength into my heart.

The evening fades as the night and my time here comes to an end. I float on the cobbled street bathed in the antiquity of moonlight. The whispery words buona notte twist in gut-wrenching sweetness.

Buona notte, I murmur, my words trailing into the star-dusted glow of night.”

In the years since, I’ve returned often to Italy, the sensuous land that continues to nurture my joy of life. Coronavirus has cancelled this fall’s trip, but I will be back. L’anno prossimo sarò in Italia. I hope you’ll be there too.

Donna Keel Armer of Beaufort, S.C., is a travel blogger and  author of the newly released Solo in Salento: A Memoir.

Dianne Hales is the author of  LA PASSIONE: How Italy Seduced the World; LA BELLA LINGUA: My Love Affair with Italian, the World’s Most Enchanting Language; and MONA LISA: A Life Discovered. My new book, “A” Is for Amore, is available to download free at diannehales.com.