A Passion for Italy: Bernini’s Angels 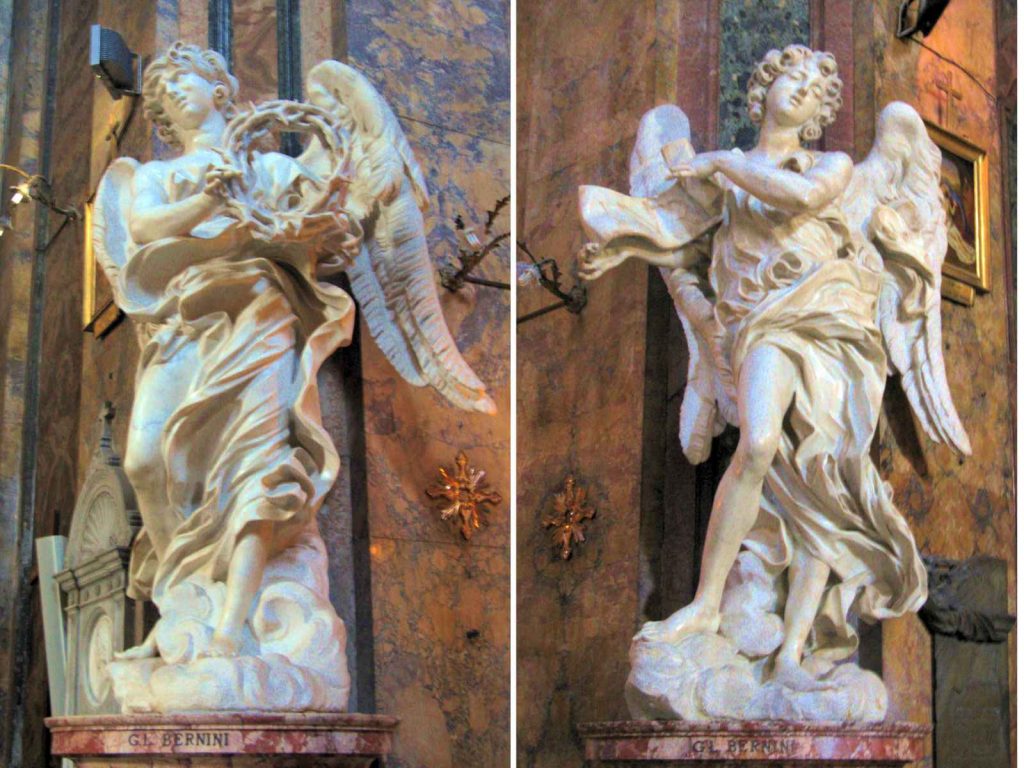 This year marks the 340th anniversary of the death of one of Italy’s most passionate and productive artists:  Gian Lorenzo Bernini (1598-1680). Over his long career, he emerged as the Michelangelo of his time, a master sculptor, architect, painter, city planner, draftsman, engraver, and playwright.

Bernini’s best known works may be his glorious Fountain of the Four Rivers, the centerpiece of Rome’s Piazza Navona, and the graceful colonnade that welcomes worshippers to Saint Peter’s.  In the Galleria Borghese his sculptures of Hades pursuing Persephone, Apollo grasping Daphne, and David confronting Goliath testify to his genius for bringing cold hard marble to trembling life.

My favorite Bernini creations may be the least visited of his works. I came upon them years ago when I rented an apartment across the street from the Church of Sant’Andrea delle Fratte, literally out in “the thrushes” when it was built in the seventeenth century.

Inside this architectural gem, two gleaming white angels, standing on either side of the front altar, looked down on me with expressions that seemed hauntingly familiar. One held the crown of thorns placed on Jesus’s head; the other, the mocking inscription identifying him as “King of the Jews.” I was certain that I had seen them before.

In fact, I had seen copies, along with eight other angels on the bridge that crosses the Tiber to the Castel Sant’Angelo, the ancient fortress that served as a tomb for the emperor Hadrian, a military garrison, and a refuge for popes. In 1668, Pope Clement IX commissioned Bernini to adorn the bridge with ten grieving angels, each holding a symbol of Christ’s Passion. Assistants carved eight of the figures, but the only two statues sculpted by Bernini himself never took their designated places. Copies by lesser artists were installed instead.

How did the “missing” angels end up in Sant’Andrea delle Fratte? The pope, enthralled by the angels’ delicate beauty, may have wanted them for his private collection. However, he died soon after their completion, and the angels remained in Bernini’s workshop. In 1729, almost half a century after Bernini’s death, the artist’s nephew donated them to the nearby church.

In Sant’Andrea delle Fratte, an oasis from Rome’s ceaseless bustle, the pristine angels remain untouched by wind, weather, or pollution. To me, they embody the “aliveness” of Bernini and the Baroque. Their marble bodies seem to sway ever so gently. Their feathered wings almost flutter. Their lush curls look as if they would be soft to the touch. Their lips curve ever so slightly upward.

When you leave the church, cross the piazza to the elegant palazzo in which Bernini lived and worked.  The words on the commemorative plaque on its façade translate as “Here lived and died Gianlorenzo Bernini, a sovereign of art to whom reverent popes, princes, and people bowed.”

Centuries after his death, we continue to bow to the genius who adorned the eternal city with even greater beauty.