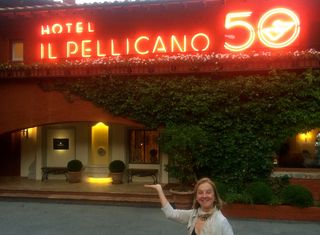 It was love at first sight (amore a prima vista). My gaze swept from majestic cliffs to terracotta roofs to flower-strewn terraces to sun-dazzled water. Il Pellicano took my breath away (ha mozzato il fiato).

“I want you to bring me here every year for the rest of my life,” I said to my husband Bob. That was 1990—and we have indeed returned almost every year. “Come gli uccelli in primavera” (like the birds in spring), I joke. How could we not? No place on earth may be more romantic.

Love is in the DNA of this renowned resort, now celebrating its fiftieth year. In the 1960s Michael

Graham, a dashing British pilot and war hero, stole the heart (ha rubato il cuore) of the beautiful American heiress Patsy Danzel. After marrying, they travelled through Europe to revel “in the intensity of their love” (nell’intensità del loro amore), as one biography puts it.

A remote hillside on Monte Argentario in western Tuscany inspired the Grahams to develop a true nido d’amore (love nest). They named it “Il Pellicano” in honor of Pelican Point, California, where they met. Rather than a standard hotel, the sprawling compound consists of a main building (una struttura principale), stone cottages (cottage in pietra), gardens (giardini) of herbs and wild rosemary, beds (aiuole) of bright flowers, and groves of olive trees and cypress (olivi e cipressi). The glitterati of Europe have made themselves at home at this posh but unpretentious resort.

When we discovered Il Pellicano in 1990, it had settled into a quiet, rustic inn. Over the years we’ve

witnessed its stunning transformation into an exclusive resort (un resort esclusivo) under the astute management of its second owner, Roberto Sciò. Every part of Il Pellicano, including its Michelin-starred restaurant,  has been updated, renovated and polished to a radiant sheen.

Many guests spend the day lounging around the elegant pool (pigramente sdraiati intorno all’elegante piscina), but I rush to the crystal-clear sea, so intensely turquoise that Italians call it azzurro-azzurro (blue-blue). Early morning swims are my favorite. Except for a few fishing boats, I have the entire Tyrrhenian sea to myself.

Il Pellicano, regularly named to international lists of top hotels, offers every possible amenity, but nature provides its most magical moments. The first time that I saw a full moon rise above the dining

terrace, I gasped. Within minutes a river of moonlight turned the sea to silver. A waiter told me this is why the peninsula is called “Argentario” (from argento for silver). If his story isn’t true, it should be. When the full moon rose once again on this visit, the sight was as magical as ever.

“I don’t believe you’re married,” The maitre’d  teased us during our first visits. “You laugh too much. You must be lovers (amanti).” Even after returning 25 times, that’s exactly how we feel at Il Pellicano.

Come with someone you cherish for una fuga d’amore in riva al mare (a love escape at the sea shore), and experience the same intoxicating feeling.

To all who have made Il Pellicano so special for us and many others, complimenti e grazie di cuore!

← Evviva Dante! Italian-to-Go: Where to Shop in the Italian Language →
FOLLOW BY RSS