Summer in the Italian Language: Three Festivals You May Not Know 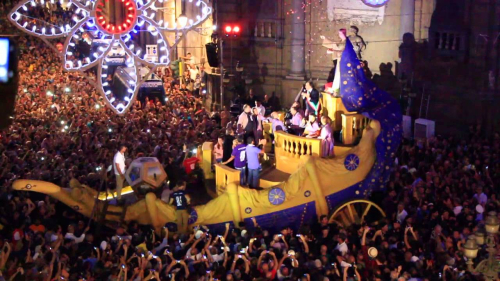 Throughout the year la festa italiana provides a delightful glimpse into Italy’s history and culture. Everything from a national holiday to a village saint’s day to a harvest, whether of wheat, olives or grapes, is a good reason for festevolezza (rejoicing), usually with special foods and lively crowds.

”Quando é festa, é festa!” one of my Italian friends likes to say–or as she translates it:  “When it’s time to celebrate, celebrate!” If you’re heading to Italy in the coming months, you might want to join in some of these festivities.

Ever since the fifteenth century the residents of this southern town have been celebrating the return of the local bishop in the fifth century after he liberated Nola’s men, who had been enslaved in Africa. Nola’s citizens came out to welcome him carrying huge bouquets of lilies. For centuries the people substituted a very heavy candle, which they lit in the city piazza. Today’s gigli (lilies) have evolved into four-ton, 75-foot-high creations of wood and paper-mache paraded through the narrow streets by relays of 90 to 120 men as orchestras play and girls with tambourines dance.

Every year Sicilians give thanks to Santa Rosalia, Palermo's patron saint. La Santuzza (the little saint), as she’s affectionately called, saved the town from the plague in 1624. The centerpiece of the elaborate celebrations has always been a triumphal cart–sometimes resembling an enormous fortress, sometimes a gigantic warship, once so opulent it was called “the little mountain of gold.” Today’s cart is a model of a seventeenth-century triumphal chariot, which looks, as author Carol Field puts it in Celebrating Italy, like “a great golden galleon set on a copper-colored seashell,” pulled by six horses with an entire velvet-costumed orchestra inside. During the festivities Palermo drapes its streets in canopies of lights that shimmer like jewels. The major events are the procession of the triumphal cart to the sea on July 13 and a reenactment of the miracle of Santa Rosalia in the piazza of the Royal Palace the next day, followed by a stunning gioco dei fuochi (play of fires) that draws thousands of spectators. (Click below.)

Count Opizzo Fieschi wanted to demonstrate his great love for his bride, Bianca dei Bianchi of Siena, when they wed on August 14, 1230. And so he ordered a cake made with 4,000 eggs, 3,300 pounds of sugar and 3,300 pounds of flour, frosted with 110 pounds of almond paste. The thirty-foot-high cake, shared by everyone in the town, testified to the immensity of his devotion.

Every year the wedding is reenacted, with a different young woman as the beautiful bride. There are fencing contests, flag-throwing demonstrations, concerts, a candlelight parade with knights in costume and, of course, an immense wedding cake. Men in medieval costume carry the torta through the town and hand out lottery tickets—blue for men, pink for women, each pair with a matching code word. The men and women must compare cards with scores of people to find their match and qualify for a slice of cake.

Far festa — to take a holiday, to have a good time

Far festa a qualcuno — to welcome someone