A Year of Italian Language and Culture: Michelangelo in D.C. 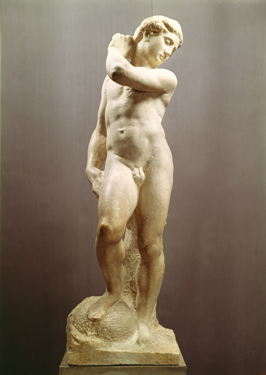 The first Italian “guest” to the United States in “l’anno della cultura italiana” (The Year of Italian Culture) is a statue: the David-Apollo (above), loaned by the Bargello Museum in Florence to the National Gallery of Art in Washington, D.C. No other artist has left a richer and more enduring legacy than its creator, Michelangelo Buonarroti (1475–1564).

Born into a poor Florentine family, Michelangelo liked to say that he had imbibed an affinity for stone in the breast milk of his wet nurse, a mason’s wife. His father tried to beat artistic inclinations out of the boy, but his obvious talent won him an invitation to live and study in the home of Lorenzo Il Magnifico, his first and most beloved patron.

Michelangelo’s genius exploded in youth and blazed into robust old age. Through almost a century of tumults, he battled with popes, broke with the Medici, and after the fall of the Florentine Republic (for which he oversaw fortifications) railed against his fellow citizens. Yet he worked ceaselessly, producing unequalled masterpieces in painting, sculpture, and architecture and earning the accolade of Il Divino, the divine one.

The word most associated with the brusque artist is “La Terribilità.” Michelangelo’s temper was indeed so fierce that the Medici Pope Leo X, who knew the artist since boyhood, called him “troppo terribile,” too fearsome to deal with. But in the artistic language of the Renaissance, “terribilità” conveyed awesomeness, virtuosity, force, vehemence.

The terribilità of Michelangelo’s figura serpentinata, such as the anguished, writhing, tormented souls in his “The Last Judgment” over the altar of the Sistine Chapel, represented art at its most sublime. (Italians derided the artists who later added “corrections” to clothe these naked figures with the mocking word braghettoni, “big underpants makers.”)

To the historian and poet Benedetto Varchi, Michelangelo’s works were “so new, so unusual, so unheard of (inaudite) in all cultures in all countries…that I for myself…not just admire, not just am stupified (sono stupefatto), not just am astonished and amazed, and almost reborn; but my pulse trembles, all my blood turns to ice; all my spirits are shocked, my scalp tingles with a most sacred and never before felt horror to think of him.”

Michelangelo’s most famous statue, his colossal David (sculpted from 1501 to 1504), embodied the defiant independence of the Florentine Republic. He was commissioned to carve another heroic figure in 1530, after the Republic’s fall. Giorgio Vasari, the father of art history, described the statue as “an Apollo who draws an arrow from his quiver,” while an inventory of the Medici calls it “an incomplete David.”

Is the unfinished David-Apollo a beautiful Greek god or a young biblical tyrant-slayer, hero of the lost Florentine Republic? If you’re in Washington D.C., before March 3, don’t miss the chance to stop by the National Gallery and see for yourself. Click below for a video from the opening of the exhibit.

DIanne Hales is the author of LA BELLA LINGUA: My Love Affair with Italian, the World's Most Enchanting Language.