A Year of Italian Language and Culture: Dante’s Inferno 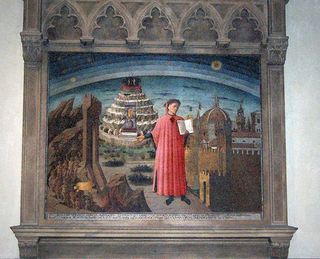 The epic poem begins on Good Friday in the year 1300, when “the pilgrim,” Dante’s first-person narrator, loses his way in a dark wood, travels deep into the earth, and enters a funnel-shaped hell with nine concentric circles spiraling down into an icy center. “Abandon hope, all you who enter here” ("Lasciate ogne speranza, voi ch'entrate") reads its infamous welcome sign.

In this abyss of darkness and fright, the pilgrim sees and mentions by name 128 sinners and converses with 37 of them, meets 30 monsters, takes two hair-raising boat rides, faints twice, and witnesses the damned being whipped, bitten, crucified, burned, butchered, deformed by repulsive diseases, transformed into shrubs and snakes, buried alive in flaming graves, skewered into rocky ground, frozen in ice, and immersed in mud, excrement, boiling blood, or pitch.

Crossing steep slopes and thunderous waterfalls, the pilgrim endures terrible heat, bitter cold, and never-ceasing fiery rain. He beholds the fearsome sight of a river of blood carrying the bodies of the violent, with centaurs shooting arrows into those who dare raise their heads. He recoils from the disgusting stench of a fetid field of human waste where those who craved earthly things are planted head first up to their bare and wriggling rumps.

The cast of memorable characters includes Hell’s “staff” of giants, harpies, hybrids, and devils with fabulously depraved names like Scarmiglione, Calcabrina, and Draghignazzo. Italian school children still relish the sheer naughty delight of Dante’s description of Malacoda (Rotten Tail), the beastly leader of an army of devils who summons his wretched troops to battle by famously “making a trumpet of his ass” and farting. But in L'Inferno the “beast that stinks up the world” is Gerione, the allegory of  fraud (frode, falsità), who sports the face of a friendly man atop a body that is part winged hairy mammal and part reptile, with a long tail ending in a scorpion’s stinger.

Most grotesque, submerged in hell’s deepest cavern, is three-headed Lucifer, the stone-cold heart of darkness. Dante describes “how my blood ran cold and my voice choked up with fear” at the sight of him. The flapping of Lucifer’s bat wings freezes the river of tears shed as he eternally chews the three greatest sinners– Judas, Brutus, and Cassius, traitors of God and Rome—in his three rapacious mouths.

The first editions of L’Inferno were an instant sensation, and 700 years later, Dante still rocks—literally. Bruce Springsteen, Patty Smith, and bands like Radiohead and Nirvana cite him as an inspiration.  Actor Roberto Benigni continues to perform “Tutto Dante” around the world. According to Italian gossip columnists, the fervid Dantista  may be expanding his repertoire and taking a role in the movie version of another Inferno, Dan Brown's mega-bestseller.

“Nel mezzo del cammin di nostra vita mi ritrovai per una selva oscura, ché la diritta via era smarrita” — In the middle of the journey of our life I found myself within a dark woods where the straight way was lost.

“Amor, ch’a nullo amato amar perdona” -– Love, that allows no loved one not to love

“Fatti non foste a viver come bruti, ma per seguir virtute e canoscenza” — You were not born to live as beasts, but to pursue virtue and learning

Click below to listen to Roberto Benigni reading the fifth canto of L'Inferno: