A Year of Italian Language and Culture: Italy’s Greatest Storyteller 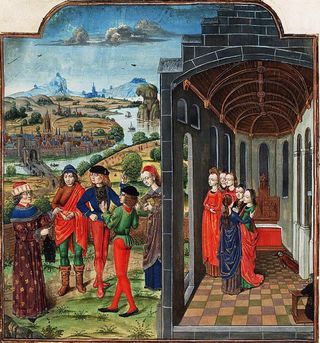 This year of Italian culture (l’anno della cultura italiana) in the United States marks the 700th birthday of the beguiling storyteller Giovanni Boccaccio, one of le tre corone (the three crowns)—along with Dante and Petrarch–of Italian literature. Every raconteur since—from Chaucer to Shakespeare to Dickens to Twain—stands in this spell-weaver’s debt.

Born in 1313, the year of the Inferno’s publication, the easygoing youth nicknamed Giovanni della Tranquillità became Dante’s first biographer, commentator, and public reader. Unlike Dante, who descended from a distinguished old family, Boccaccio was the illegitimate son of a merchant-banker, who brought the boy into his household and arranged an apprenticeship with the Naples branch of his bank. When he proved inept, young Boccaccio switched to law, another mismatch of temperament and talent.

All Boccaccio wanted to do was write, eat (he was a lifelong buona forchetta, or big eater), and chase women. He fathered two illegitimate children in Naples and another in Ravenna. But the unattainable woman he pined for was “Fiammetta” (little flame), the inspiration of his early writings.

Boccaccio might have ambled good-naturedly through life, but fate blindsided him. His father went bankrupt. Fiammetta shattered his heart. In 1348 the Great Pestilence killed a quarter of Florence’s citizens, including his stepmother and numerous friends.

Boccaccio became the foremost chronicler of Florence’s plague years, so devastating that many feared the world was ending.
His antidote to the daily horror was an exuberant, entertaining, death-defying work of literature. In The Decameron, Italian’s first great prose narrative, a lieta brigata (merry brigade) of seven young women and three young men (pictured with Boccaccio above) take refuge in a country villa and swap 100 novelle (tales) of wily merchants, corrupt politicians, clever wives, henpecked husbands, and bumbling fools, all caught up in acts of love, lust, mischief, and treachery.

Boccaccio’s prose rivaled Dante’s poetry in its range, stretching Italian from the highest to the lowest levels. Contrary to the common perception, only about a quarter of his tales have bawdy themes, but these sparkle with such earthy vitality that Italian coined the word boccaccesco to describe a spicy story. (Synonyms include  impudico, indecente, lascivo, licenzioso, osé, piccante, salace, sboccato and spinto.)

Boccaccio’s zesty stories spread as swiftly as the contagion that inspired them. However, their author came to scorn them, along with the Italian vernacular, and chose instead to write turgid tomes in Latin. His girth grew, and his health deteriorated. After two marriages and countless liaisons, his love life soured to such an extent that Boccaccio derided all women in a misogynist treatise.

Boccaccio ultimately despaired of his literary merit and considered burning his works and his library. Petrarch stopped him. On Boccaccio’s death, his entire collection went to the monastery of Santo Spirito in Florence—a timeless gift to the world.

Click below to learn more about Boccaccio's life (in Italian):