A Year of Italian Language and Culture: Renaissance Networking 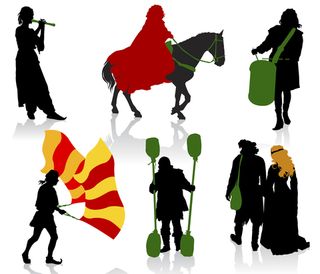 The Birth of Social Networking

Italians invented the Renaissance (from “rinascita” for rebirth), which as Mary McCarthy observed in The Stones of Florence, “is the same as saying that they invented the modern world.” They also pioneered the phenomenon we know as social networking (more commonly used in Italy than "rete sociale").

In a four-year million-dollar-plus research project, British scholars are documenting 500 such groups—the first intellectual networks of early modern Europe. “Just as we create user names for our profiles on Facebook and Twitter and create circles of friends on Google plus,” one investigator explains, Renaissance Italians “shared—and commented on—topical ideas, the news of the day, and exchanged poems, plays and music.” And they did so with wit and style.

Consider L’Accademia della Crusca (Academy of the Bran), devoted to separating the literary fior di farina (flower of the wheat) from the crusca (chaff or bran). The self-styled Crusconi (Crusty Ones) playfully gave themselves names related to farming, cooking, baking, and bread, such as Lievito (yeast or leaven) and Macinato (milled into flour).

La Crusca’s members set themselves the goal of creating the first great dictionary of officially recognized words in any European tongue. This was no dry scholastic venture. The academy’s voluminous archives teem with menus, skits, plays, puns, jokes, and rhapsodic odes. Among its traditions was an annual stravizzo, a term members defined with understatement as “eating that happens together with pleasant conversation.”

The jocular gourmands took their mission seriously. Over decades of discussion and debate, they created the Vocabolario degli Accademici della Crusca, published on January 20, 1612. Its 960 oversized pages contain the genome of la bella lingua italiana.

Crusconi also created less august works, such as “Il Bacco in Toscana” (“Bacchus in Tuscany,” a poetic ode of praise for Tuscan wines by Francesco Redi (1626-98). Its verses deride “he who drinks water” (chi l’acqua beve) and conclude with a rousing: “Wine, wine is your only drink!” (il vino, il vino e’ l’unica bevanda).

Undoubtedly Redi’s peers found their own ways to “like” (mi piace) his poem with the equivalents of a thumbs-up, a tweet (literally cinguettio but Italians say un tweet) or an Instagram image (un’immagine su Instagram) But how did they handle the timelessly tricky task of “defriending” (rimuovere l’amicizia) someone?  I hope with a pen rather than a sword.

An Italian teacher shared this ode to the vocabulary of virtual communication:

Voi pubblicate (you all publish)

Nessuno studia  (no one studies)