A Year of Italian Language and Culture: The Prince 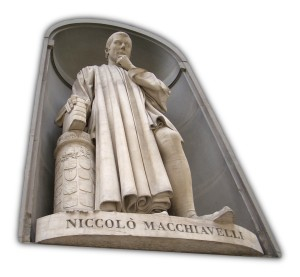 Italy is commemorating the 500th anniversary of the writing of a classic work: Niccolò Machiavelli's Il Principe (The Prince). Although completed in 1513, the treatise by the man who "put the science into political science" wasn't published until 1532, five years after his death.

Machiavelli's name since penetrated the global vocabulary as an international byword for political cunning and pragmatism. However, no one, as T. S. Eliot observed, “was ever less Machiavellian than Machiavelli.”
After fourteen years as a civil servant and diplomat in the Florentine Republic, Niccolò Machiavelli (1469-1527) was tried, tortured, and exiled after the Medici reclaimed power.

Frustrated in his forced retirement to his modest country home, Machiavelli began work on The Prince in the hope that a clear-eyed, no-nonsense tactical handbook would display his political acumen and win him a government position–a dream that never materialized.

At the time, the Medici Pope Leo X, son of Lorenzo il Magnifico, and his brother Giuliano seemed likely to form an
Italian alliance, perhaps even a nation state.
As Machiavelli saw it, a Medici pope (or prince) who heeded his advice
could bring a better future to Italy and perhaps even take up arms  to liberate the peninsula from its “barbarian”
invaders—a vision of unification almost 350 years before the fact.

What if this ruthless prince lost the
adulation of his people?  Better to be
feared than loved, shrugged Machiavelli, who observed that since men are
generally ungrateful, vacillating, cowardly, and greedy, they might promise
their souls to a prince yet  desert or
betray him because love is fickle, while fear is not.

As a case in point Machiavelli cited the notorious Cesare
Borgia, called Il Valentino from his
title as duke of Valentinois.  When his
father, decadent and opportunistic,
assumed the papacy as Alexander VI, the two conspired to take over much
of central Italy.  Machiavelli coolly
describes how Borgia, to subdue unruly Romagna, “full of thefts, fights, and of
every other kind of insolence,” hired   a
“cruel and able” henchman and gave him full authority to do whatever was necessary
to impose order.

Once the province was pacified, Borgia wanted to show the
resentful populace that “if any form of cruelty had arisen, it did not
originate from him but from the harsh nature of his minister.” So one morning
the local citizens awoke to discover their hated overlord “placed on the piazza
in two pieces with a block of wood and a bloody sword beside him.” Borgia had
deftly accomplished his objective.   “The
ferocity of such a spectacle,” Machiavelli wrote, “left the people satisfied and amazed at
the same time.”

When the Florentine
Republic returned to power in 1527, Machiavelli applied for his old post but
was rejected. He died soon thereafter.  His country, which
ignored him in life, didn’t know quite what to say of him in death. His
appropriately monumental tomb in Santa Croce, the burial site for Italy’s
titans of history, reads simply, “To so great a name, no epitaph can do
justice.”

machiavellicamente –- in a crafty manner

To listen to a reading (in English) of The Prince, click below: