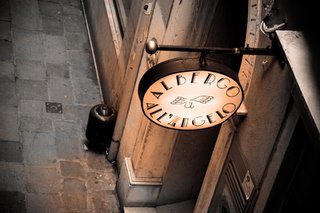 As we were tooling around Lago Maggiore many years ago, my husband asked me, “Who is this guy Albergo and why is his name on so many buildings?” I gently explained that “albergo” means hotel.

Derived from the Germanic haribergo for a military barracks, albergo dates back to the Dark Ages, when barbarian hordes swept over the Italian peninsula. The Romans, who described their orderly style of warfare as bellum, couldn’t withstand the disorderly tactics of the Germans, whose werra (war) became the Italian guerra and the root of the English “guerilla.”

Other Teutonic imports to the Italian language include scherzare (to joke), ricco (rich) and russare (to snore). Some words reflect the miseries the barbarians inflicted– gramo for wretched, scherno for scorn, smacco for shame. Others reveal contempt for the occupying forces. Italian uses zanna, from the German for tooth, only for an animal’s fang or tusk and stalla, German for house, for a horse stall or a pigsty.

Over the centuries Italian evolved as a sort of linguistic hotel, accommodating guests from many languages. The Spaniards, who presided over the Kingdom of Naples, contributed courtly words such as complimento (compliment), baciamano (handkiss) and parata (parade). French added stylish touches such as moda (fashion) and cravatta (tie) and changed the meaning of parrucca, which had meant one’s natural hair in Italian, to wig (a "big wig" is a parruccone). A friend taught me a Russian import when she accused me of being a stachanovista (workaholic), from Stachanov, a Russian miner who introduced new techniques to increase productivity.

Some English words have simply acquired Italian endings: chat became chattare; blog, bloggare; and skype, skypare. However, others have taken on a uniquely Italian spin. In Italian a “golf” refers to a pullover; a “mister,” to a coach of a soccer team; a “smoking,” to a tuxedo; a “spot,” to a commercial; and a “fiction,” to a film for TV. From American politics Italian journalists took “ticket” for a party’s presidential and vice-presidential candidates and created “tricket” for three contenders in an election.

albergo a gestione familiare – a family-run hotel, a bed-and-breakfast

“Questa casa non è un albergo!” – “This house is not a hotel!” a common complaint of mother whose children are constantly coming and going

← Who Are "You" in Italian? cafone →
FOLLOW BY RSS