An Earthquake in the Heart of Italy 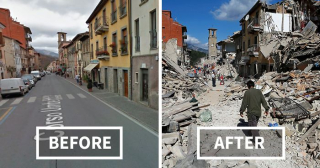 The earthquake di magnitudo 6.2 (with a magnitude of 6.2)) struck at 3:36 a.m. on August 24, provocando morti e feriti (causing deaths and injuries) throughout the regions of Lazio, Marche, Umbria e Abruzzo. La scossa violentissima (the most violent shock) was felt as far north as Rimini and as far south as Naples.

L’epicentro (the epicenter) of the quake was in Rieti, near the towns of Accumoli and Amatrice. Il danno (the damage) was so severe that entire villages have been polverizzati (pulverized). Click here for more before-and-after photographs from the region.

“La situazione è drammatica” (the situation is dramatic), said a government official, who described villagers as “scavando a mani nude” (digging with their bare hands) to pull people from the wreckage.  As the mayor of Amatrice put it. "Il paese non c'è più.” (The town no longer exists.) In Accumoli, the church’s bell tower (campanile), although recently reinforced, collapsed, killing an entire family (una famiglia intera) in a nearby home.

“Il bollettino è destinato a crescere" (The toll is destined to rise), say public health officials. Many of the victims (molte delle vittime) were babies and young children (neonati e bambini) and the elderly (anziani). The narrow roads (strade strette) in the mountainous region hampered the efforts of firefighters (vigili del fuoco) and other rescue workers (soccorritori), who at first could reach the villages only by foot (a piedi). Aftershocks (scosse di assestamento) as strong as 5.4 in magnitude continue to rock central Italy.

Nella tragica notte del terremoto (on the tragic night of the earthquake), a friend just 25 miles from Amatrice described the “interminabile scossa” (endless shock) as “lunga, violenta, paurosa” (long, violent, frightening). Fleeing into the piazza, he breathed a "umano sospiro di sollievo" (a human sigh of relief) to have escaped harm, yet immediately recognized “la pena terribile “(the terrible anguish) of those who had not been so fortunate. 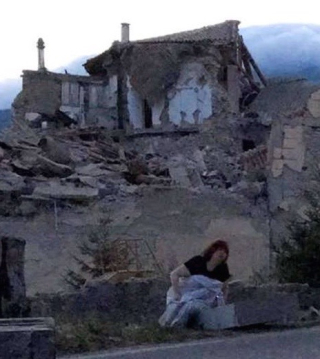 The photograph he calls "La Pietà di Amatrice" of a mother holding her lifeless child rimarrà nell'immaginario collettivo, simbolo della tragedia immane e ineluttabile (will remain in the collective imagination, a symbol of the cruel and inescapable tragedy).

Many charities are collecting donations for the survivors. Click here for a list compiled by The Florentine and here for recommendations from Charity Navigator.

Venire in soccorso –- to come to the rescue

Dianne Hales is the author of Mona Lisa: A Life Discovered and the New York Times best-selling La Bella Lingua: My Love Affair with Italian, the World's Most Enchanting Language.