An Italian Memory: My Night at the Opera 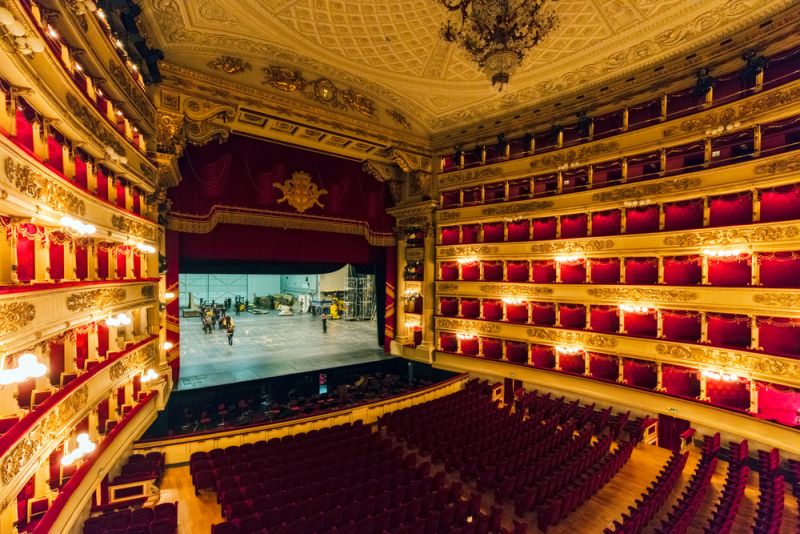 La Scala recently re-opened after months of silence imposed by Covid-19 restrictions. The news made my heart sing—and brought back the memory of my first night at this iconic concert hall.

Years ago, when my research for LA BELLA LINGUA  led me to Milan,  I eagerly bought a ticket for  La Scala’s production of Adriana Lecouvreur, a tragic love story by  the Italian composer Francesco Cilea.  I booked a room at the Grand Hotel et de Milan, where Verdi lived off and on throughout his life. When the beloved maestro suffered a stroke in his suite in 1901, the streets outside were covered with straw to deaden the clatter of carriages and horses so as not to disturb his final days.  Verdi’s apartment remains unchanged. When I checked in,  his music echoed through the lobby..

The afternoon before the performance, I toured the La Scala museum, which displays death casts of Verdi’s and Puccini’s graceful hands and portraits of the women in their lives.   At lunch at the adjacent La Scala cafè, I couldn’t resist the “La Traviata” panino, a disappointingly prosaic ham and cheese sandwich.

Upon arrival at the theatre, I discovered that my red velvet-draped “box” was exactly that—a  dark cube with floor-to-ceiling walls that blocked a clear view of the stage except for the two seats in the front row (one of them mine) . After I took my chair, a young couple—she in a floor-length silk gown; he, in a leather bomber jacket with several cameras slung over his shoulder—entered the box and explained that they had just arrived after a long trans-oceanic flight.  The husband ungallantly took the good seat next to me; his wife, the one  behind. Minutes before the performance two German-speaking women—one so stunning I assumed she was a runway model and her mother—burst into the box.

The older frau, upset that she couldn’t see the stage from her second-row seat, rammed her chair into the miniscule space between the man and me.  Thrusting her shoulders between us, she craned forward, so close that if I turned my head my lips would have grazed her cheek. After about ten minutes, her neck muscles gave out,  and she retreated.

Half an hour into the opera I heard a sound not in the score—loud snoring from the man next to me, who had sagged in his seat with his head cushioned on the balustrade.  Then I glimpsed an amazing sight: The determined older woman, kneeling sideways on her chair, had splayed herself, Spiderman fashion, against the side of the box. With both arms outstretched, she had inched her torso along the wall so she could peek out toward the stage. The jet-lagged gentleman sputtered in his sleep. Spidey clung for dear life to the wall.  And, of course, the band played on.

This was not the glamorous night at La Scala that I’d expected, but I resolutely focused on the stage and the singing. And then it happened.  The ineffable melting of words into music, the timeless thrill of spectacle and song worked their magic.

Now,  after a long silence, live opera is again sweeping La Scala’s audiences aloft on its golden wings. If I were among the lucky listeners, I would leap to my feet and shout “Bravo!”