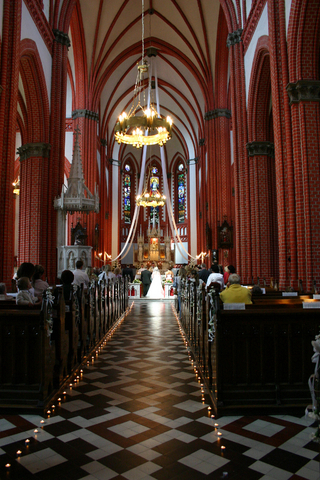 Contributing bloggista Silvia Bascelli, whose daughter recently married, tells what happens on the day of an Italian wedding. Her original Italian version appears  on my website. Here is my English adaptation:

The big day arrives. Finally everything has been taken care of:  la chiesa (the church) , i fiori per il suo addobbo (the flowers for decoration), la musica (the music), il vestito da sposa e quello dello sposo (the outfit for the bride and for the groom), le fedi nuziali (the wedding rings),  un bouquet di fiori che la sposa tiene in mano (the bridal bouquet), il fotografo (the photographer), il ristorante (the restaurant), il parrucchiere (the beautician), la macchina che porta la sposa in chiesa (the car that takes the bride to the church),  and le partecipazioni (wedding cards). If it rains, everyone repeats the old saying "sposa bagnata, sposa fortunata" (A  soaked bride is a lucky bride) to console a bride who will not be crowned by a splendid sun.

The bride comes to the altar accompanied by her father. Sometimes there are le damigelle d'onore (maids of honor). To the sides of the spouses  stand i testimoni (the witnesses), who  sign  l'atto di matrimonio (the marriage certificate). The mothers of the bride and groom usually become very emotional. As another Italian proverb puts it,   "Non c’è matrimonio senza lacrime e non c’è funerale senza risate." (“There isn’t a marriage without tears or a funeral without laughter.”)

After the ceremony, the guests throw il riso (rice) at the newlyweds to wish them prosperity. They go to the restaurant, take photograhs and videos, and si fanno i brindisi (make toasts), such as “Viva gli sposi! “ (“Hurray for the newlyweds!") Then they eat—and eat.

Un pranzo di nozze vecchio stampo  (an old-style wedding meal) is truly an attempted homicide (omicidio), if not an attempted massacre (strage). Guests have to stay at table for an absurd number of hours and eat an incredible quantity of food. Fortunately more couples are organizing  lighter ricevimenti (receptions) in which guests take only as much food as they want. But of course, at the end there is always  la torta nuziale (the wedding cake).

Traditionally the bride and groom give a gift of confetti (candy-covered almonds) in a  little container  of porcelain, crystal, silver, or another material. This bomboniera has evolved into un piccolo inutile soprammobile (a small and useless knickknack) that no one knows what to do with–which may explain  why this tradition is falling out of fashion.

Also fading away is the old belief in  “mogli e buoi dei paesi tuoi"  (wives and cattle from your hometown). According to  traditional wisdom, a wife from the same village as her husband would share the same culture and attitudes so the couple would be more likely to enjoy a happy life together.

After una luna di miele (honeymoon), which may or may not immediately follow un matrimonio, the sposino and sposina (newlywed husband and wife) settle down to vivere felicemente per sempre (live happily ever after).

passare a seconde nozze – to remarry

Nè di Venere, nè di Marte, non si sposa e non si parte, nè si da' principio all'arte –  Neither on Friday (named for Venere or Venus) nor on Tuesday (named for Mars) marry, leave on a voyage or begin a project. According to  superstition, these are unlucky days to launch  new venture

Here is a charming tune that's popular on many an Italian wedding day: