The Lost Angels of Rome 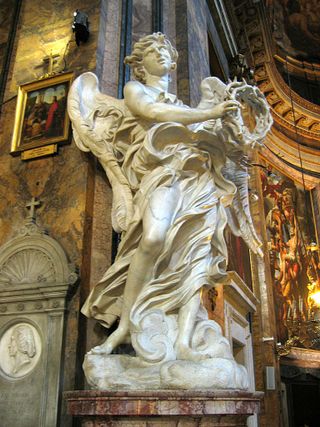 One of the most famous angels in Rome stands atop the Castel Sant’Angelo (Castle of the Holy Angel). The mammoth structure on the banks of the Tiber  was originally built as a mausoleum by the emperor Hadrian in the year 123.  From its ramparts Romans fought back the assaults of the Visigoths in 410 and the Ostrogoths in 537.

In 590 a virulent plague was ravishing Rome, and Pope Gregory the Great entreated God’s mercy. The archangel Michael, fulfilling the original meaning of angelus as a messenger from God, appeared in a vision sheathing his sword over the fortress, a signal of the plague’s end.   The grateful pontiff christened Castel Sant’Angelo in his name and had an imposing statue of Michael mounted on top.

Over the centuries the bridge leading to the Castel Sant’Angelo became the principal crossing point for pilgrims to St. Peter’s basilica.  In 1668 Pope Clement IX commissioned ten stone angels to line its balustrades, thereby transforming the Ponte Sant’Angelo into the most theatrical monument of Baroque design.

The master artist and architect Gian Lorenzo Bernini did the drawings for the angels—all male, with grieving faces and graceful bodies, brilliantly positioned to be observed (and appreciated) from every direction.   Each of the angels carried a symbol of Christ’s passion and death, such as the whip that scourged him and the nails used to crucify him.

The angels on the bridge became icons for millions of pilgrims, but the most exquisite, the only two carved by Bernini himself, never took their designated places.  Copies by lesser artists were installed instead.

Some say that the Pope couldn’t bear the thought of exposing such beautiful statues to the elements.  Others contend he wanted to move the pair of angels—one carrying the crown of thorns (above) and the other the mocking inscription I.N.R.I. (for Jesus, King of the Jews)—to his own palace.

Bernini, perhaps as a way of promoting his not-so-talented offspring, claimed that they were the work of his son Paolo Valentino and kept the  “lost" angels in his studio opposite the church of Sant’Andrea delle Fratte (St. Andrew of the Thickets), so called because it was once literally out in the sticks.

In 1729 Bernini’s nephew donated the angels to the church, which was partly designed by Bernini’s former student and eventual rival Francesco Borromini. The angelic pair remains there still, their beauty undiminished by fire, earth, water or air, to each side of the front altar.  I think of these heavenly messengers when the bells of Sant’Andrea, right across from the apartment we are renting, ring out the Angelus, and I never fail to pause before them whenever I visit the lovely church.

il sesso degli angeli— the sex of angels, a phrase for trivial or inconsequential matters

Sei un angelo! –- You are an angel (to thank someone who has done a favor or service)

“Uomo solitario, o bestia o angiolo!” — A loner is either a beast or an angel.

Cav. Dianne Hales is the author of LA BELLA LINGUA: My Love Affair with Italian, the World's Most Enchanting Language.