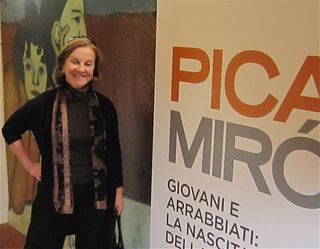 Visitors don’t usually come to Florence, jewel of the Renaissance, in search of modern art. But an exhibit called “Giovani e Arrabbiati: La Nascita della Modernità” (Angry Young Men: The Birth of Modernity), at the Palazzo Strozzi until July 17, offers a fascinating perspective on three of the twentieth-century’s great masters: Picasso, Miró and Dalí.

All three of these artists grew up (cresciuti) in Catalonia, Spain, but came to fame in France. Picasso and Miró lived and built their careers there, while Salvador Dalí remained largely in Spain. The Florentine exhibit brings together more than sixty works (più di sessanta opere) produced by the artists at the beginning of their careers in the first decades (nei primi decenni) of the last century.

Structured like a film in a series of “flashbacks,” the exhibition (la mostra) takes visitors back in time (indietro nel tempo) to the very birth of modernity. Beginning with Dalí’s meeting with Picasso in 1926, it traces the origins (le origini) of modern art through Dalí’s responses to Miró and Miró’s relationship with Picasso and ends just before the young Picasso’s arrival in Paris in 1900.

The exhibition explores the common roots (le radici comuni) of a style that was to bring renown to these three great artists, underscoring the eagerness they shared to rebel against the conventions of the time (ribellarsi alle convenzioni dell’epoca). Each was an “emerging talent” (talento emergente) in his day. Each sought to develop an artistic vocabulary of his own (un proprio linguaggio artistico). And each looked back to the past in order to invent the future.

As much as I enjoyed the exhibit, I also delighted in the contrast between the relatively recent masterpieces and their setting in a splendid Renaissance palazzo. To my initial surprise, they looked right at home. Then I realized that they should. After all, Florentines invented the Renaissance—which, as author Mary McCarthy observed in The Stones of Florence, “is the same as saying that they invented the modern world.”

Despite the passage of five hundred years, I could see, particularly in Picasso’s powerful sketches of his “demoiselles,” echoes of another artist whose rebellious approach (approccio ribelle) blazed the trail from all that had been in the past to all that could be in the future: the prototypical angry young artist, Michelangelo.

The Medici pope Leo X, who had known the fierce-tempered genius since boyhood, called him “troppo terribile” (too terrible) to deal with. In the artistic language of the Renaissance, terribilità took on new meaning as a term that captured the awesomeness, virtuosity, force and vehemence of Michelangelo's works. Could we say anything less about those of Picasso and the rebels he inspired?

For more information on upcoming exhibits and events at Palazzo Strozzi, click here.