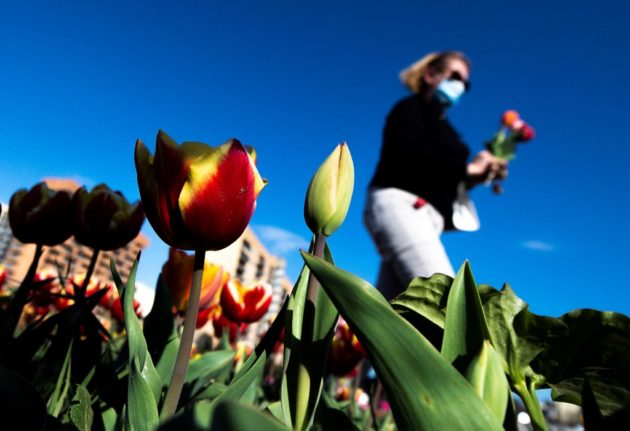 T.S. Eliot called it the cruelest month (il mese più crudele). Yet this is also the romantic month that inspired classic songs and movies like Enchanted April, April in Paris and April Love.  And as the cheerful childhood rhyme reminds us, April showers bring May flowers. April has long been of my favorite months to visit Italy. Since that’s not possible this year, I’ve been savoring April in Italian.

Legend credits Italians with inventing April Fool’s Day. Back in 1564, Pope Gregory introduced a new calendar that changed the beginning of the new year from April 1 to January 1. Some people who didn’t believe or wouldn’t accept the change kept celebrating New Year’s on the first of April. Others tried to show how silly these original April fools were  by sending them on pointless errands or tricking them into thinking something false was true.

Somehow the fool came to take the form of a fish.  On April 1, children would try to fasten a paper cutout of a little fish  (pesciolino) to the back of a schoolmate. “Have you seen it?” they’d chant. “Who?” the unwitting child would ask.  “Il pesce d’aprile!” (the fish—or fool—of April) they replied.

According to an old proverb, Aprile e Maggio son la chiave di tutto l’anno (April and May are the keys to the whole year). We have plenty of reasons to welcome both as they bring the fields back to life. Aprile fa il fiore e maggio si ha il colore (April brings the flower and May the color.)  More specifically, Aprile carciofaio, maggio ciliegiaio. (In April, artichoke. In May, cherries.)

Even April rains can be welcome. Here are some reasons:

*Quando tuona d’Aprile buon segno per il barile — When it thunders in April, it’s a good sign for the barrel (of wine).

For anyone swept away in an April romance, another  Italian proverb may give reason for pause: Gli uomini sono aprile quando fanno all’amore, dicembre quando hanno sposato. (Men are like April when they flirt/court; like December once they are married.)

← An Italian Easter Leonardo and Mona Lisa: Still Famous After All These Years →
FOLLOW BY RSS