Bold, Beautiful and Dangerous in the Italian Language 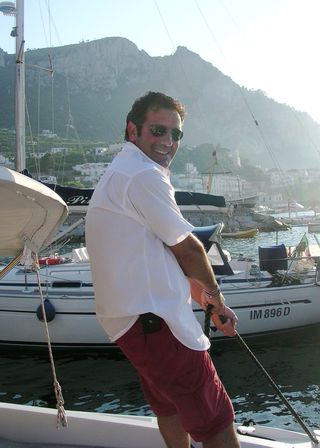 A few years ago we set off to sail the islands (le isole) of the Tuscan archipelago with some mariner friends. After a few hours on the sky-blue Tyrrhenian sea (Mare Tirreno), my husband Bob (Roberto in Italy) broke out a bottle of champagne for a toast.

A crisis (crisi) emerged: There were no flutes on board. The champagne was so buono (good); the plastic boat glasses, so brutti (ugly). Si doveva fare qualcosa. (Something had to be done.) With a quick phone call, we headed into the nearest port –- Giglio Porto, now world-famous as the site of the shipwreck (naufragio) of the giant cruise liner, the Costa Concordia.

The port (il porto), teeming with ferries (traghetti) and commercial boats, offered no place to dock. The captain maneuvered our boat close to the pier. A young waiter (cameriere) came running from a dockside restaurant (conveniently owned by the captain’s cousin) with four champagne glasses (calici) chilling in an elegant ice bucket (secchiello del ghiaccio).

He raised the bucket as high as he could. Our co-captain Erasmo (above), dangling by one arm from the railing, leaned down from the prow. The boat rocked, up and down (su e giù), to and fro (avanti e indietro). For long moments, the bucket seemed suspended in mid-air. Then Erasmo lifted it triumphantly with one arm like a soccer champion (un campione del calcio).

We applauded. The fishermen (i pescatori) in the harbor cheered and waved. A few motorboats sounded their clacson (horns). The captain’s cousin (cugina) blew kisses from her restaurant railing. To us, it seemed an Italian variation on the classic Grey Poupon commercials. To Italians, it was a perfect example of “bella figura” a term that goes beyond making a good impression to describe a distinctive flair that transforms mundane moments into memorable ones.

“Una tendenza teatrale” (a theatrical tendency) is part of Italy’s charm, the acclaimed journalist Beppe Severgnini noted in a column in Corriere della Sera, yet it also is “alla radice di molti nostri problemi” (at the root of many of our problems). “Non soltanto sul mare”(not only on the sea), he added.

“Cosa insegna questa nave che affonda?” (What does this sinking ship teach us?) Severgnini asked. “Una volta ancora, un italiano è caduto nella trappola della bella figura.” (Once again an Italian has fallen into the trap of la bella figura.) Someone—either the captain, as his employers claim, or the ship owners, as he claims—could not resist the dramatic gesture of offering an inchino (a bow or salute) by coming close to shore to display the boat’s magnificent silhouette.

Troppo bello, meno buono. Too much of the beautiful and too little of the good, Italians say. But this may be changing. The captain of the Costa Concordia is “tanto poco amato” (so little loved), Severgnini observed, because he didn’t see the danger and then non ha saputo affrontarlo ed è andato via (didn’t know how to deal with it and went away)–non una bella figura, per niente (not a bella figura at all).

per figura –- for show only

Che figura! — What a disgrace! How embarrassing!