Becoming a Knight of the Italian Language 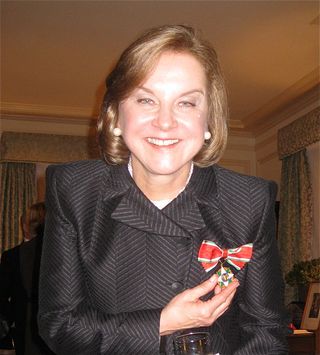 The President of Italy, Giorgio Napolitano, has awarded me the highest honor the government can bestow on a foreigner: honorary knighthood, with the title of Cavaliere dell’ Ordine della Stella della Solidarietà Italiana (Knight of the Order of the Star of Italian Solidarity) in recognition of La Bella Lingua as "an invaluable tool for promoting the Italian language."  The onorificenza (honor) was presented at a ceremony at the Italian Consulate in San Francisco on March 25. (Photo above; i will post more at my website in the coming week.)

Italy has a long tradition of honoring citizens who have served their country in extraordinary ways with a cavalierato (knighthood). Individuals in the military and in civilian life may be named to a specific ordine cavalleresco (knightly or chivalrous order), depending on the nature of their achievements. The noun cavaliere is always masculine, and both male and female knights are referred to as Cavaliere, abbreviated as Cav.

After World War II the Italian government created the Ordine della stella della solidarietà italiana (Order of the star of Italian solidarity) to honor and express appreciation to those outside the country who  contributed to the reconstruction of Italy (la ricostruzione dell’Italia). This designation is now conferred upon Italian expatriates and foreigners (stranieri, like myself) who have contributed to la preservazione dell'italianità (the preservation of the Italian spirit) and il prestigio nazionale all'estero (the national prestige abroad) through various activities.

The first mentioned is la promozione della lingua italiana (promotion of the Italian language), and I am proud that LA BELLA LINGUA has served this worthy purpose. Other honorees have been recognized for their volunteer work, philanthropy, scientific and technological research, commercial ventures, and la promozione eno-gastronomica (promotion of wine and gastronomy).

I am, for once, senza parole (without words). To receive un’onorificenza così particolare, così grande, dal governo d’Italia (an award so special, so great, from the government of Italy) is  a great and unexpected honor. However, the recognition does not belong only to me.  I accepted the beautiful medallion (in three sizes and forms for various occasions) con profonda umiltà e gratitudine a nome di tutti coloro che considerano la lingua italiana uno dei più bei regali che Italia ha fatto al mondo intero (with profound humility and gratitude in the name of all who consider the Italian language one of the most beautiful gifts that Italy has made to the world).

To the government of Italy and to the many Italian sostenitori (supporters) of La Bella Lingua, grazie di cuore (thanks from the heart). Viva l’italiano! 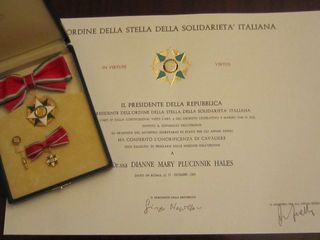 Click below for a particularly moving rendition of Italy’s national anthem, Fratelli d’Italia, sung a cappella by Roberto Benigni at this year’s San Remo music festival