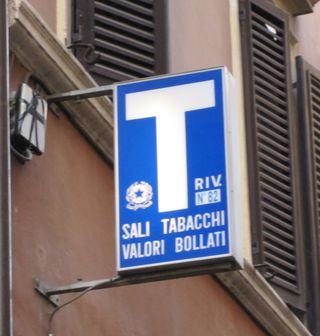 Even if you don't smoke, there are plenty of good reasons to stop at the busiest store on a city street or in the tiniest village in Italy: the tabaccaio. In this guest post, Silivia Bascelli takes us inside these uniquely Italian shops:

Il tabaccaio is obviously the shop where tobacco is sold, but you can buy much more than cigarettes (sigarette) there. The shop sign is always the same: a small rectangle with a big T and the words  ”Sali e tabacchi" (salt and tobacco).

The tabaccaio is licensed to sell goods and services (beni e servizi) that, according to law, are controlled exclusively by the state. Salt once was a government monopoly, but no longer is.

Today’s state-regulared items, besides cigarettes, include lottery and lotto tickets; matches (i fiammiferi); stamps (i francobolli); revenue stamps (le marche da bollo), which are digital stickers with a bar code and value stamped on them); and stamped paper (la carta bollata), used for official documents such as birth, marriage and death certificates, requests to a court (tribunale),legal documents issued by a notary, house rental contracts (contratti d’affitto) and such. A tabacchino (little tabaccaio) near a courthouse can sell millions of revenue stamps for judicial proceedings — and take a percentage of the sales.

So at a tabaccaio you can buy something as innocuous as stamps or something as bad as cigarettes. You might even get sucked into il vizio del gioco d’azzardo (the bad habit of games of chance). The tabaccio is the place to go if you want to giocare al superenalotto (play the lottery), giocare al totocalcio (play the football pools)  or place scommesse sportive (sports bets).

Various tabaccai specialize in different things, and some become gaming and betting meccas well-known among tutti i giocatori (all the players). They create their own lotto systems in order to hit the jackpot when it gets very high. If they manage to win (vincere alla lotteria), the money is split among the players in the betting pool.

Now that we live in the age of the ATM, customers can make payments or use services once available only at the Post Office at a tabaccaio. For instance, they can pay car taxes (il bollo delle automobili) and traffic tickets (le multe). If you are travelling in Italy, you can go to a tabaccaio to purchase prepaid calling cards for a cell phone (ricariche dei telefoni cellulari), international calling cards (schede telefoniche internazionali) and city bus tickets (i biglietti degli autobus urbani).

In effect the tabaccaio presents a microcosm of Italian life, with people stopping by throughout the day for one reason or another (per un motivo o per un altro). Once it was a modest and unremarkable type of store, with a distinctive smell of tobacco (tabaccoso). Today you can find elegant tabaccai, such as this one on the Piazza San Silvestro in Rome, providing many more goods and services than in the past. 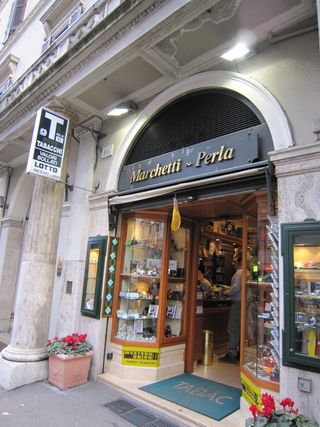