Summer in the Italian Language: Bug Off! 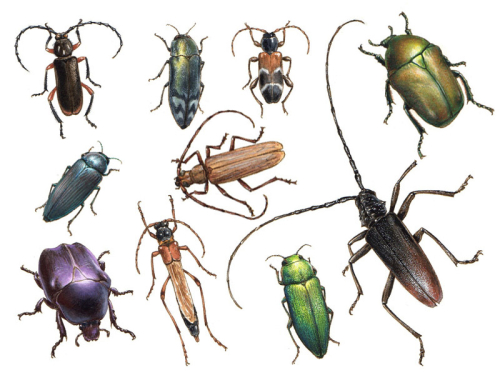 In Italy as elsewhere, the least welcome of summer guests are gli insetti. For centuries the infamous marshes of the Maremma, the western part of Tuscany, were a breeding ground for mosquitoes that infected thousands of people — travelers as well as residents — with malaria. Among those fatally stricken were Eleonora di Toledo, wife of the Grand Duke of Tuscany Cosimo I de’Medici. She died of malaria along with two of their sons after a hunting trip in 1562.

The threat of malaria is gone but the bugs remain, as ravenous as ever. Here are some of their Italian names:

You can try swatting, but you're likely to end up, as Italians say after any fruitless endeavor, con un pugno di mosche (with a handful of flies, or empty-handed). For self-protection, I turn to two modern products that could have changed Maremma’s history: Baygon, an industrial-strength bug killer (insetticida) so potent that it sizzles when it hits the pavement, and Autan, an insect repellant (repellente per insetti) that I coat myself with from head to toe. If I could, I’d retreat behind a zanzariera (mosquito net or curtain) day and night.

Some might accuse me of fare d’una mosca un elefante (making an elephant out of a fly — or a mountain out of a molehill) or prendere un fucile per acchiappare una mosca (taking a rifle to shoot a fly). But nothing quite literally bugs me — fa saltar la mosca al naso (literally makes the fly jump at the nose) —more than bug bites (punture d’ insetto).

However, there’s no way to keep un pezzo grosso (a big bug) from flitting into a conversation — not even with a cry of “Zitto e mosca!” (a colloquial way of saying “Keep quiet!”). When things get so still that you could hear a pin drop, Italians say, “Non si sentiva volare una mosca” (you could hear a fly flying).

In Italian, as in English, si prendono più mosche con una goccia di miele che con un barile d’aceto (you can catch more flies with a drop of honey than with a barrel of vinegar). But if someone says, “Non fare il pidocchioso!” they’re not calling you a louse, just urging you not to be stingy.

Un pidocchio rifatto — parvenu, someone newly rich who shows off his wealth without any elegance.

Dianne Hales is author of MONA LISA: A Life Discovered and the New York Times best-selling LA BELLA LINGUA: My Love Affair with Italian, the World's Most Enchanting Language.