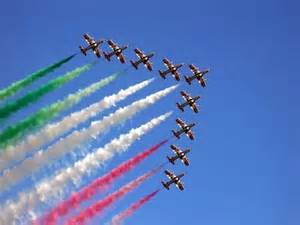 The eternal city (la città eterna) traces its birth to April 21, 753 BC. If you’re in Rome this week, you can enjoy the festivities, which typically include special events at the Circus Maximus (Circo Massimo), concerts, gladiator displays, a parade and fireworks over the Tiber (Tevere).

If I could be there, I’d head for the oldest part of Rome: the Palatine hill (colle Palatino), named for the goddess Pales, patroness of shepherds. In the eighth century B.C., the leader of a tribal settlement in central Italy ordered that the newborn sons of a disgraced Vestal Virgin be tossed into the Tiber. Their cradle, drifting downstream, washed ashore at the base of the Palatine hill.

According to legend, a lupa (she-wolf) suckled the twins Romulus and Remus (Romolo e Remo). However, lupa was slang for prostitute, and their nursemaid may well have been human. Several years ago archaeologists discovered what could be the original lupercale, the cave that sheltered the twins and that later served as a shrine for their worship.

After the boys had grown to maturity, they decided to build a new town. A violent argument erupted between them.  Romulus killed his brother Remus and gave his name to the settlement that would grow into a great empire.

Over the centuries the Palatine hill, with its tranquil setting and splendid views, attracted rich and powerful residents. Octavius, later adopted by Julius Caesar, was born on this sacred site in 63 B.C. When the Senate proclaimed him Augustus, Rome's first emperor, he moved to a house near the small structure known as Romulus's hut.

His successors, the emperors Tiberius, Caligula and Claudius, built much grander homes atop the Palatine. Visitors to these mansions called them palazzi—the root of the word for "palatial" residences in French (palais), Spanish (palacio) and English (palace).

Rome changed everything, bringing civilization — laws, roads, urban planning, public works, even indoor plumbing – to a vast swath of territories. The glory of ancient Rome faded, but its citizens endured. Descendants of the empire’s tough-fighting, rough-talking legions, i romani doc (Romans born and bred), also referred to in Roman dialect or romanesco  as “romani de Roma,”  invented their own dialect slogan: “Lassatece passà, semo romani!” (Let us pass; we are Romans!) The imperious words were so often followed with a punch or a dagger thrust that a native son wasn’t considered a true Roman until he had “crossed the step”–the one at the door of the city’s oldest prison, Regina Coeli.

The imprint of ancient Rome remains on everything from coins to monuments, tombs and temples. The city’s manhole covers are still emblazoned with S.P.Q.R., the Latin abbreviation for the Senatus Populusque Romanus, the senate and people of Rome. Italians joke that it really stands for "Sono pazzi questi romani." (These Romans are crazy.)

Roma caput mundi -– Latin for Rome, capital of the world.

Paese che vai, usanza che trovi –- When in Rome, do as the Romans do. (Literally, the country that you go to, the customs that you find.)

Click below to enjoy a classic tribute to Rome: