Passion and Pleasure on an Italian Journey 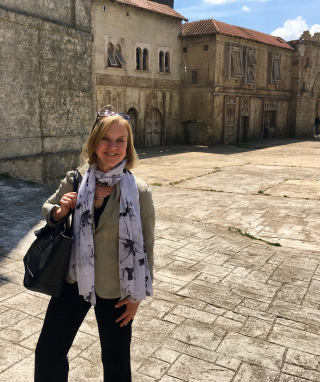 “Was your trip for business or pleasure?” asked the customs agent at the San Francisco airport on my recent return from Italy.

“Business,” I replied. Then I paused to confess the whole truth.

“Well, I was researching a book on Italian passions…”

“So some pleasure too,” he said with a wink. It was indeed a trip brimming with passion and pleasure as I travelled from Agrigento’s magnificent valley of the temples to stone villages high in the Apennine mountains. On Good Friday in Trapani I was swept into the drama of the 24-hour procession of “mysteries” commemorating the passion of Christ. On Easter Monday, I climbed the mountain overlooking the town to Erice's ancient temple of Aphrodite, goddess of love.

Spring-green Umbria offered passions of a different sort. In Perugia's Studio Moretti Caselli, a museum as well as a workshop, Maddalena Forenza follows

the tradition of five generations of master glass painters.  Across town in a restored church,  Marta Cucchia of Giuditta Brozzetti (right) weaves cloths of timeless beauty on a centuries-old loom. Maurizio Tittarelli Rubboli displays his family's acclaimed designs and forges modern ceramics in the Museo Opificio Rubboli in the postcard-pretty village of Gualdo Tadino. In her home "laboratorio" outside Perugia,  Luisa Spagnoli, whose great-grandmother founded Perugina chocolate, creates sublime confections that elevate candy-making to a delectable art.

At Rome's La Sapienza university, archaeologist Clementina Panella showed me long-buried treasures — statues, vases, urns, even an imperial head (in photo) — uncovered in thirty years of excavations on the Palatine Hill. "We have been digging in a very important area that had never been explored before," she says, "so we've come upon one discovery after another." (You can support her quest to explore Rome's earliest days  by contributing to LoveItaly's crowd-funding campaign.)

Ancient Rome comes alive in a different way on the backlot of Cinecittà, which I toured with the endlessly resourceful Barbara Lessona of Contessa Concierge, who specializes in making Rome feel like home for every client. Thanks to her, I met the daughter of the coppia reale (royal couple) of the golden era of “Hollywood on the Tiber”: director/producer Dino De Laurentiis and actress Silvana Mangano. Veronica De Laurentiis, actress and mother of celebrity chef Giada De Laurentiis, has become an international champion for women who’ve suffered domestic abuse.

I extend appreciation and admiration to the other talented artisans I met, including ceramist Maria Antonietta Taticchi of Perugia's Materia Ceramica; cioccolataio Giordano Mangano of Augusta Perusia; the cloth-makers of TelaUmbra in Città del Castello; and jeweler Francesca Trubbianelli of Raku Ceramic Workshop. Many thanks to the outstanding guides who shared their love for their regions, particularly Lorenzo Capraro of Agrigento Experience and Daniela Paci of AltraUmbria, as well as my gracious hosts at Villa Athena in Agrigento, Badia Nuova in Trapani, Hotel Sina Brufani in Perugia and Margutta Glamour Studios in Rome. Grazie di cuore to Andrea, Crescenzo and Simone D’Ambrosio of Pallenberg Bros. Travel, who always take the best possible care of our family, and to their colleagues at La Mattina Travel (with special thanks to Claudio and Pina) in Sicily and Autonoleggio Spigarelli in Umbria.

Upcoming posts will focus on words and expressions I've picked up along the way.  However, the experiences did far more than expand my vocabulary: They enriched my appreciation of Italian creativity, tradition and passion.  If you travel to Italy in the coming months, by all means, visit the famous monuments and museums. But I urge you also to seek out local artists and artisans, who embody the living heart of Italy. To get started, check out Italian Stories, a website that lists tours and workshops by region and craft, and Articity, which features artisans in Perugia.  Buon viaggio!