Butchering (in) the Italian Language 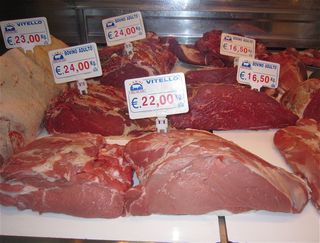 The Italian Renaissance had its share of celebrity “top chefs,” but just as acclaimed were the “meat men” who butchered animals and carved meat at courtly banquets. On these theatrical occasions, the scalco (carver) played a critical role: He sliced each guest’s serving on the basis of his or her social rank, an exacting assignment that inspired an elaborate vocabulary for cuts of meat in the Italian language.
A duke might rate a fesa (a tender cut from the top side of the hindquarters); a lesser dignitary, a scamone (top rump). A piece of the muscolo posteriore (hind shank) or a fettina (very thin slice of meat) might quickly put a vassal in his place.
In Italy meat (carne) – long considered a prized luxury by the poor – still merits a store of its own, the “macellaio” or “macelleria” (butcher shop). The name comes from the verb macellare (to slaughter), but macellata (butcher’s meat) takes on a bewildering number of names and expressions.
The window of a macellaio in Rome (above) keeps it simple, with cuts of veal (vitello) and beef (bovino adulto or adult cow). Carne can also be rossa (red), bianca (white meat as chicken, turkey, or rabbit), macinata (minced) or
stufata (stewed).
Meat also can be identified by its source. Carne di manzo, for instance, comes from three-year- old heifers that have not calved or bulls that have not been castrated. Bue refers to a castrated bull that is at least four years old. Rather than the pot calling the kettle black, in Italian it’s il bue che dice cornuto all’asino (the bull that calls the donkey a cuckold).
A vacca is an adult cow that has calved. Latte di vacca (cow’s milk) comes from a vacca da latte (milk cow). Mucca serves as a general term for cow, and the dread disease bovine spongiform encephalopathy is called mucca pazza (mad cow) in Italy.
Vacca doubles as a coarse insult for a slob, a whore, or a woman who is grassa come una vacca (fat as a cow). But it’s perfectly acceptable to exclaim “Porca vacca!” (the equivalent of “Holy cow!”). Federico Fellini gave “vitelloni” (big overgrown calves) a new meaning when he used it as the title for one of his first movies as a derogatory description of aimless young men.
Of course, you wouldn’t want to speak ill of carne della propria carne (one’d own flesh and blood), and a curt remark could tagliare fino alle carne (cut to the flesh or the quick).
“Sono io in carne ed ossa” (Here I am in flesh and bone), a friend visiting from Italy once announced. Essere in carne (literally to be “in meat”) is a euphemism for being plump). Rimettersi in carne means to put on meat or flesh—in other words, to put some meat on one’s bones.
Someone who undertakes too many projects at the same time “mette troppa carne al fuoco” (puts too much meat on the fire).Carne also is the root of carnale (carnal, bodily) and of “carnevale,” the festive Italian celebration when Christians once said “addio alla carne” (goodbye to meat) for the 40 days of Queresima (Lent).
My favorite form of Italian beef—bistecca alla fiorentina—comes from Tuscany’s fine Chianina cows. The name, a Florentine waiter once told me, comes from the city’s tradition of serving these tender steaks to the populace on the feast of Saint Lorenzo, the Medici family’s patron saint. One year English travelers in the throng eagerly cried out for servings of what they called “beef steak.” Italians took up the chant of “Bistecca!” and the English derivative stuck to “la fiorentina.”
For a mouth-watering video of “la bistecca fiorentina,” click below: