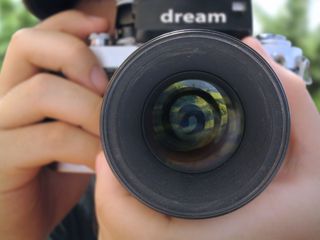 The
driver quickly reassured me that my
camera was exactly where it should be — in my
hotel.  It took a moment for me to
realize that he was teasing me about a common mistake: assuming that “camera” means the same in Italian as
in English.

Yes,
you certainly want to take your camera on vacation in Italy. But don’t try to
snap pictures with an Italian camera, which looks and sounds like the English word but has four walls, a ceiling, and a
floor.

When you check
into a hotel, you can ask for a camera con vista (room with a view), a camera singola (single room), or a camera doppia or camera matrioniale (double room).  Your home may have a camera da letto
(bedroom), a camera a due letti  (twin room), and a camera
degli ospiti (guest room). A camera
ammobilliata  is what the British call a
“bedsit,”  a combination bed and
living room, while a camerino
(little room) serves as a dressing room.

A camera can also play a public role.
Local businesses often belong to the Camera di Commercio (Chamber of Commerce), while
politicians campaign for seats in the Camera dei Rappresentanti (House of
Representatives). A camera ardente
is a chapel of rest; a camera oscura, a dark room; a camera a gas, a gas chamber.  Then
there’s a camera d’aria — a
chamber of air, or inner tube.

The woman who tidies up your hotel room is a cameriera; a manservant,  a cameriere.  Cameriere
di ristorante translates as
waiter;  cameriera di ristorante, as waitress.  College students and military recruits often live in a camerata (dormitory or barracks), where they are likely
to develop a sense of cameratismo
(comradeship).

So what Italian word do you use for a device that
takes pictures? The correct term is macchina fotografica
(literally a photographic machine) — unless you’re snapping photos with your
cellphone’s built-in camera. That’s a telefonino con fotocamera.  My macchina
fotografica, it turns out, was not lost, but exactly
where the driver suggested: back at the hotel, in my camera.

Camerista — a manservant for noble and wealthy  family