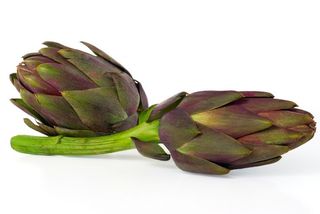 The word carciofo,
like the artichoke itself, first
came from Arabia, where it played the role of matchmaker in a  tender love story. According to legend,
the fair daughter of an Arabian farmer, after observing her donkey eating a
strange thistle, tried it herself.
Experimenting with eating the odd-shaped food raw, grilled and stewed,
she began selling artichokes in the marketplace.  A prince who heard of the new delicacy insisted on meeting
the cook. They instantly fell in love and lived happily ever after.

According to archaeological evidence,
artichokes had migrated north by the time of the Etruscans some 3,000 years
ago.   The ancient Romans
called them Carduos, their word for thistle, although the slang term was
cynara, for a girl of this name who was turned into the prized plant.  This far-fetched tale testifies to the
passion of Roman buongustai (gourmets)
for artichokes, which they hoarded and prohibited the masses from buying or eating.  “Artichokes were discovered by asses,”
the Roman writer Pliny observed disdainfully, “and are still being consumed by
them."

Catherine de’
Medici, another buona  forchetta
(hearty eater), toted artichokes and cooks to prepare them to Paris when she
married the future king of France in 1533.  Carciofo debuted in Italian literature in the writings of
the poet Ludovico Ariosto in the sixteenth century.  By 1729, according to the venerable Vocabolario of the
Accademia della Crusca, it had taken on another colloquial meaning as slang for
a foolish or stupid fellow.

At the end of the
nineteenth century, an enterprising cook named Angelo Valiani, who was anything
but foolish or stupid, became famous for the tasty carciofini sott'olio (small,
juicy artichoke heads in oil) that he sold at a cold buffet in train stations, first in his home town
of Orbetello and then in Grosseto and Rome. Delighting in his success, he
proudly named his newborn son Carciofino.

The parish priest refused to baptize the boy with such an outlandish name. Valiani argued that if
a wild beast (leone, or lion) could inspire the name of Leo XIII, the pope at
the time, how could the church object to a plant. The priest, stumped for a
rebuttal, gave his blessing to the boy called "Little Artichoke."

Although artichokes
grow throughout much of Italy, Rome is famous for the quality of the large,
tender, purplish artichokes produced in the surrounding countryside. The
carciofo romanesco has been granted IGP status, a designation similar to the
DOC designation for wines produced in a particular area. The most famous
recipes for Roman artichokes are “carciofi alla Romana" (braised upside down in
seasoned olive oil) and “carciofi alla Giudia” (Jewish style,
fried upside down until browned then turned and cooked until tender).

Every year since
1950 thousands of  Italians
celebrate their beloved thistle at the annual Sagra del Carciofo Romanesco in
Ladispoli near Rome. In addition to cooking demonstrations and tasty samples,
the festival boasts a competition for best artichoke sculpture.

For a quick view of artichokes as you’ve
never seen them before — in sculptures of a hot-air balloon, a butterfly and a
boat –  click  below:

cimaroli — literally “those that grow on the top”), the
Roman artichokes considered the best because of their large, pulpy, globe-like
leaves