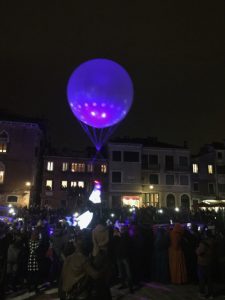 On a chilly night in February, a gigantic silver balloon rises above a Venetian canal like a moon lassoed from the sky. Dangling below, an acrobat gyrates into a spinning star. Sky ballerinas with huge butterfly wings flutter around her. Giant ten-feet-high anemones unfurl long filmy tendrils. Fire dancers on gondolas juggle flaming torches. This is not the Disneyfied Carnevale of elaborate costumes and expensive balls that draws tens of thousands of visitors but a simpler, smaller, sweeter celebration held in Cannaregio, the working-class neighborhood where the highest percentage of native Venetians live.

During this magical evening, I hear no languages other than Italian and Venetian. Children scamper in Harlequin costumes (with a few galactic superheroes in the mix). Women swirl in the Carnevale costumes flowing robes of another age; men don the long-beaked masks of plague doctors. Confetti falls like snowflakes. This scene, which I describe in La Passione: How Italy Seduced the World, captures the particularly exuberant spirit of Carnevale in Italy.

For centuries the pre-Lent festivities of Carnevale sumptuously celebrated carne, which translates as both “meat’ and “flesh.” However, the name comes specifically from the Latin for “meat” (carnem) and “take away or remove” (levare). A church decree dating back to 653 declared that anyone who ate meat during the forty days of Lent (Quaresima in Italian) could not receive communion on Easter.

According to le Monnier’s Dictionary of the Italian Language, Carne Levare was first used for the sumptuous dinner eaten the night before Ash Wednesday, which marks the beginning of Lent. Over the years “Carnevale” was gradually extended to cover the entire period from Epiphany to la settimana grassa (the fat week) before Ash Wednesday.

During Venice’s Carnevale, which lasted for months, party-goers wore costumes and elaborate maschere (masks). The bauta covered the entire face but had no mouth opening and a lot of gilding. The oval-shaped moretta was worn by women, often along with a veil. The full-face white larva (from the Latin for mask or ghost) was made of fine wax cloth.

Over the centuries Venice’s pre-Lenten merry-making has inspired some pithy axioms:

Wherever you may celebrate, I wish you Buon Carnevale!