Casanova in the Italian Language 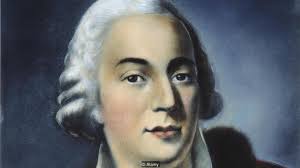 A Guest Post by Kathleen Gonzalez and Tiziana Businaro

Giacomo Casanova is one of Italy's most notorious historical figures. His memoirs enlighten us about life in the 18th century, and his vibrant stories captivate, illuminate and titillate.  We learn details about his life from his autobiografia (autobiography), also known as the memorie (memoirs), which were published postume (posthumously, or after his death).

Casanova was born and grew up near the Church of San Samuele in Venice. As a teenager, he was under the tutelage of Abate Tosello, a local clergyman who was preparing him for the priesthood. Casanova took gli ordini minori (the minor orders) but never became a full-fledged priest. He presented his first sermone or predica (sermon) in this church, which earned him parecchi bigliettini d'amore (little love letters) in the donations basket. He also received un biglietto anonimo (anonymous letter) that he said was so indiscreto (indiscrete) that he best not repeat the story to his readers.

One of my favorite stories from this episode of his life is about Casanova's hair. He had thick, healthy hair, described as capelli voluttuosamente pettinati (voluptuously combed hair) and  impomatati (pomaded). Casanova lorded this feature over his brother Francesco, who had to wear a parrucca (wig) and envied Casanova's riccioli (curls).

Abate Tosello noticed Casanova's vanity and believed his hair was improper for a future man of the church. In Italian there are numerous idiomatic expressions relating to hair.  "Il diavolo lo aveva preso per i capelli" (the devil had him by the hair), Abate Tosello  declared, warning Casanova “che sarebbe stato scomunicato" (that he would be excommunicated).

While Casanova slept, the priest snuck into his room and snipped off some of his hair. Casanova threatened to murder the Abate in revenge. A woman introduced Casanova to her parrucchiere (hairdresser), who cut and styled his hair to such flattering advantage that Casanova felt he really did deserve la scomunica (excommunication).

Most people think of Casanova's writing only as il racconto delle sue storie d'amore (the story of his love affairs), but his 12-volume memoirs are also la storia delle sue avventure in giro per tutta Europa (the story of his travel adventures around Europe). Casanova wrote in other genres as well: un saggio (an essay) on Voltaire; un racconto del duello (an account of the duel) with Count Branicki in Poland; un periodico (pamphlet) titled Opuscoli Miscellanei; and a retelling of una storia d'amore (a love story) set in medieval times and written in forma epistolare (epistolary or letter format).

Casanova also wrote in French, although he admitted that "il francese non è la mia lingua" (French is not my tongue). "Metto su carta ciò che il cielo fa uscire dalla mia penna” (I put on paper what heaven sends from my pen), Casanova commented. Here "dalla mia penna" literally means "from my pen" but also could mean "from my writing." Is he being ironic, humble or simply honest?

Avere un diavolo per capello -– literally to have the devil for hair; to be furious or nervous

Kathleen Gonzalez is the author of Seductive Venice: In Casanova's Footsteps as well as other books about Venice. Her guidebook, translated by Tiziana Businaro with Adriano Contini, will be published soon in Italian by Supernova Edizioni with the title A Venezia con Casanova. Learn more at kathleenanngonzalez.com or seductivevenice.com.

← How Romeo and Juliet Became Italy's Most Famous Lovers Italian You Won't Learn in Class: Idiomatic Verbs →
FOLLOW BY RSS