Celebrating Fathers in Italy and around the World 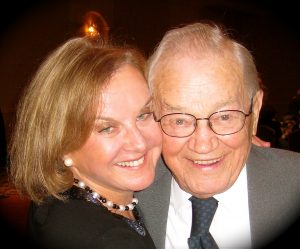 On Father’s Day I cherish a special memory: the last time I danced with my Dad, at an Italian-American banquet in Northeastern Pennsylvania.   My mother had died a few months before, and I decided to bring my broken-hearted Dad along with me on a book tour that would take me to our home town of Scranton, Pa. Together we navigated the swirls of the New Jersey Turnpike. We stayed at roadside motels and a residence hall of a leafy campus. We ate at the first Mexican restaurant my 90-something Dad had ever visited. One of his hearing aids konked out. I lost a contact lens. “We better hope Mom is in heaven looking after us,” I said.

She was. My Dad, an irrepressible sparkle returning to his eyes, charmed the students and teachers at my presentations. A few times he opted to stay in his room and watch baseball. “It’s gonna be the same talk, right?” he asked. I assured him he wouldn’t miss a thing.

The highlight was the banquet, where dashing young men in their best suits stopped by our table to pay their respects to my Dad,  the oldest man in the hall.  They were so respectful, so kind, so attentive that I realized just how much being—and loving—a father means to Italians.  It’s no wonder that many Italian-Americans celebrate Father’s Day twice: La Festa del Papà on March 19, the feast of San Giuseppe (St. Joseph), the husband of Mary and earthly father of Jesus, and on the official American holiday, the third Sunday in June.

In Italy a father (padre) is called a  Babbo (Daddy) in Tuscany, Sardinia and several southern regions but a Papà  (pronounced pa-PAH) elsewhere. The most famous Daddy of all is Babbo Natale (Father Christmas).  Il Papa (PAH-pa) is the pope or Santo Padre (the Holy Father), while God remains the eternal father (Padre Eterno or Padreterno).

The ties between Italian fathers and children are strong. The English expression “like father, like son” translates as tale padre, tale figlio in Italian. A spoiled young man may be dubbed a figlio di papà (Daddy’s boy). A tyrannical, domineering father may be called a padre padrone. Francis Ford Coppola’s iconic movies testified to the power of a padrino or godfather.  In film, as in life, power often passes di padre in figlio (from father to son). The writer Camillo Sbarbaro (1888 – 1967) captured his love for his father in a classic poem that includes this verse:

In his children’s hearts, every father is “il migliore Papà del mondo” (the best Dad in the world).

Auguri (best wishes) to all the world’s Dads!

← Happy Birthday to the Real Mona Lisa! 7 Reasons to Learn Italian in Italy →
FOLLOW BY RSS