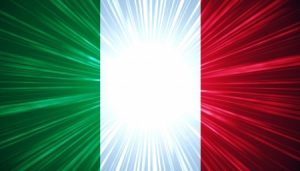 Every October the United States celebrates Italian heritage month—with good reason.  More than a mere country, Italy embodies a culture that has  transformed art and architecture, language and music, food and fashion. Imagine painting without Leonardo. Sculpture without Michelangelo. Literature without Dante. No Verdi choruses or Puccini arias. No Fellini films, Ferrari roar, Valentino red.   Tables bereft of pasta, pizza and a Sicilian cake so divine that its bakers swore  it could make the dead breathe again.

Western civilization would surely have sprouted elsewhere,  but the planet would have been a paler place, a rainbow stripped of its most vibrant hues.  Italy’s borders contain more than half of UNESCO’s designated cultural treasures. Italian paintings, sculptures and buildings adorn cities around the world.   Leonardo’s Mona Lisa and Michelangelo’s David outrank all other masterpieces as the most famous works of art.

Italian wordsmiths created la bella lingua by crafting the effervescent Tuscan vernacular into a language so rich and powerful that, as Dante demonstrated in his Divine Comedy, it can sweep readers down to hell and up to heaven. Books such as Machiavelli’s The Prince and Castiglione’s The Courtier  taught diplomacy and etiquette to Europe.

Italy also bestowed upon  the world  the eternal gift of music.   Musicians everywhere play the do-re-mi notes invented by an Italian monk and perform with instruments, such as the oboe, piano and violin, invented by Italians. Italian terms such as allegro, aria, concerto, soprano and libretto echo through the language of music.

Italians created the cuisine that the world loves best. Its flavors cajole the taste buds. Its textures caress the tongue. The soft center of a pagnotta (a round loaf of bread) feels like a puff of cloud in your mouth. The sound of a Florentine bistecca sizzling on the grill tingles the ears. Italy’s signature foods—pasta and pizza—have conquered more people in more countries than any dish from any other nation.

Italian designers, beginning in the Renaissance, raised fashion to an art. Today designer clothes by Armani, Versace and Prada appear on runways and red carpets around the globe.

Italians patented the first cinematografo—a machine that recorded, developed and projected films—and the forerunner of all panoramic projectors. Italian movies, including classics such La dolce vita and Roma città aperta, rank among the most unforgettable films made in any place at any time.

Beyond these achievements, Italy inspires all of us with its passion for life—and love.   When it comes to matters of the heart, who wouldn’t want to be as daring as Italy’s gladiators, as eloquent as its poets, as alluring its beauties, as beguiling as its suitors?

For these reasons and many more, we all celebrate the heritage of Italy and Italians—not just during October but throughout the year.  Viva l’Italia!