Coming in 2019: A 10th-Anniversary Edition of La Bella Lingua 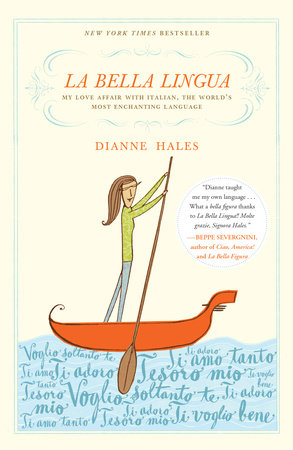 A book that keeps selling long after publication is said to “have legs." LA BELLA LINGUA, published in 2009, sprouted wings that carried it to readers around the world. Now I am delighted to announce a new updated and expanded 10th-anniversary edition of LA BELLA LINGUA, to be published next Spring.

More than  decade ago, when I first mentioned my plan to write a biography of Italian, a businessman in San Francisco scoffed: “You couldn’t have picked a less relevant language—except maybe Urdu.” In fact, Italian barely edges out Pakistan’s official tongue as a spoken language. But LA BELLA LINGUA proved him wrong.

Embraced by students and teachers of Italian, Italian-Americans, Italian diplomats and linguists, and those  who love Italy and its culture, LA BELLA LINGUA garnered a place on the New York Times best-seller list, inspired an acrostic in the Sunday Times and served as the subject for several dissertations by Italian graduate students.

Shortly after its publication, Italy's Consul General in New York City described the book as “pivotal” because it marked the transformation of Italian from what was once considered just another ethnic tongue to a cultural language that everyone, even non-Italians like myself, can appreciate.

In 2011 the President of Italy awarded me the highest recognition the government can bestow on a foreigner: a knighthood, with the title of Cavaliere dell'Ordine della Stella della Solidarietà Italiana  (Knight of the Order of the Star of Italian Solidarity), for the contributions LA BELLA LINGUA has made in promoting the Italian language.

The most heart-warming responses have come from the readers who tell me that LA BELLA LINGUA has touched their lives, motivating them to study Italian, trace their Italian roots or embark on explorations of their own. An artist on a remote farm in South Africa credited LA BELLA LINGUA with inspiring her lush paintings of Italian fountains and gardens. A Danish woman wrote that my book stirred memories of buying Italian newspapers at the train station in Copenhagen as a girl and “chewing my way through them" because of her love for Italian parole (words).

In a scene straight out of Harry Potter, a British man described pulling his rucksack from the luggage rack of a commuter train: “‘Plop!' something landed on the seat in front of me. Staring up at me was a bespectacled lady in a gondola. The words that caught my eye and proved to be my salvation were: 'tesoro mio!' (my treasure)–two words that have never rang so true.” He credits LA BELLA LINGUA with rekindling his “thirst, quest, obsession with learning Italian.”

“It took me more than two months to read your book–essentially because I didn't want it to end,” a humanities professor wrote. “I kept it in my car, bringing it out when I stopped at a wine bar for a drink or a bite to eat. And now that I have finished–what am I to do?” A young Italian writer felt compelled to thank me “per la passione e la preparazione e l'arguzia"  (for the passion and preparation and wit) with which I described his language.

I credit the book’s enduring appeal, first and foremost, to its inspiration: Italian. Other languages may be better suited to commerce, technology, science or finance.  But no other tongue expresses human feelings and emotions more powerfully.  Italian, which has enriched the realms of art, literature, music, philosophy, cinema, fashion and cuisine, embodies civilization itself. To me, it is the language of our shared humanity, everyone's moth1er tongue.

I extend grazie di cuore (heartfelt thanks) to all who have supported LA BELLA LINGUA. And I look forward to continuing its journey with a new edition!