Celebrating the Festivals of May in Italy 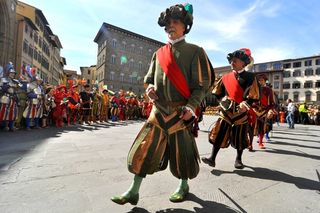 If you’re heading to Italy in the coming weeks (as I am), you can cheer the drivers in the famous Mille Miglia (1000 mile) car rally or celebrate Pinocchio’s birthday in Collodi (Tuscany). Here are some other not-to-be-missed festivities:

*Maggio Musicale Fiorentino, one of the oldest music festivals in Italy, features opera, concerts and dance. The outdoor performances at night often end with dazzling fireworks displays. While in Florence, be sure to go the city’s famous Iris Garden, open to the general public only in May. You’ll gain an entirely new appreciation for the root of Florence’s Italian name: Firenze, derived from the Latin for “to flower or blossom.”

*Giro d’Italia, the largest cycling event of the country, begins, for the first time in its history, in Israel   on May 4. The riders then travel to Sicily, where their route includes a steep ascent of Mount Etna. The race ends with a grueling climb up the Grand Sasso in the Italian Alps. Click here for a map of the entire route.

*Corsa dei Ceri (Race of the Candles). The stony, silent town of Gubbio in Umbria explodes into frenzied excitement every May 15. Three teams of men run up and down its steep streets carrying Ceri, gigantic wooden constructions, each weighing about a thousand pounds and bearing a statue of a saint on top. The Ceri and the Corsa dei Matti (Race of the Crazy Ones, as it's nicknamed) may date back to the twelfth century, when Gubbio was miraculously spared from the forces of Frederick Barbarossa.

*Calendimaggio, a series of medieval and Renaissance spettacoli (shows) with concerts, dances, archery, flag-waving, cross-bow displays and torch-lit processions, held in Assisi in early May.

*La Barabbata, a procession in which men wear costumes and carry tools representing the traditional trades while white buffalo pull floats displaying the fruits of the trades, celebrated May 14 in Marta on the shores of Lake Bolsena.

*La Festa di San Domenico, a procession on the first Thursday in May in Cocullo in the Abruzzi, highlighted by the carrying of a statue of the town's patron saint covered with live serpents.

*Sposalizio dell’Albero, the wedding of the tree, on May 8 in Vetralla in northern Lazio, in which townspeople decorate a couple of oak trees with garlands and plant new trees in a ceremony that asserts the town's domination over the forest.

*Infiorata di Noto, a huge festival with flower petal art displays and a parade in Noto, Sicily, during the third weekend of May.

*Il Palio di Ferrara, a historical horse race dating from 1279, run the last Sunday in May, with events every weekend of the month, including a procession with over 1000 people in Renaissance costumes on the Saturday night before the race.

Far festa a qualcuno — to welcome or greet someone warmly