Celebrating the Patron Saint of the Italian Language 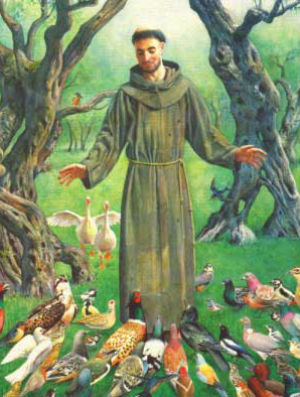 October 4 marks the feast of one of the most beloved saints, St. Francis of Assisi (1181-1226). Renowned for his rapport with all God’s creatures (noto per il suo rapporto con tutte le creature di Dio), he also qualifies as the patron saint (il patrono) of la bella lingua.

A sickly but charming child, Francesco became the ringleader of a group of fun-loving, hard-drinking, spoiled young men (un gruppo di giovani viziati, forti bevitori e amanti del divertimento) in Assisi. Among his delights (tra i suoi diletti) were the charming French chansons of Provence, which had migrated to Italy.

Even animals responded to his heartfelt words. When a gargantuan wolf (un enorme lupo) terrorized the town of Gubbio, the friar approached the beast. The wolf lunged at him, but Francesco entreated him not to eat “Brother Ass” (Fratello Asino, as he referred to his body). The wolf curled up at his feet. In Greccio near Assisi,  Francesco brought a real ox and donkey into the church at Christmas time to create the first Nativity scene (rappresentazione della Natività).

The tune has been lost, but lines like these capture its melodic spirit:

Here is an English translation:

“Be praised, my lord, for sister moon and stars

in heaven you formed them—clear and precious and beautiful.

Be praised, my Lord, for brother wind and air,

and every kind of weather, cloudy and fair,

by which you give your creatures what they need.

With this verse, comprehensible in its original language to contemporary Italians, the humblest of saints (il più umile dei santi) raised the humble vernacular (l’umile vernacolo )to a heavenly height (un livello celestiale).

Fare un fioretto–- to make a small vow to God

Dianne Hales is the author of MONA LISA: A Life Discovered,   LA BELLA LINGUA: My Love Affair with Italian, the World's Most Entrancing Language and LA PASSIONE: How Italy Seduced the World (coming in April 2019).