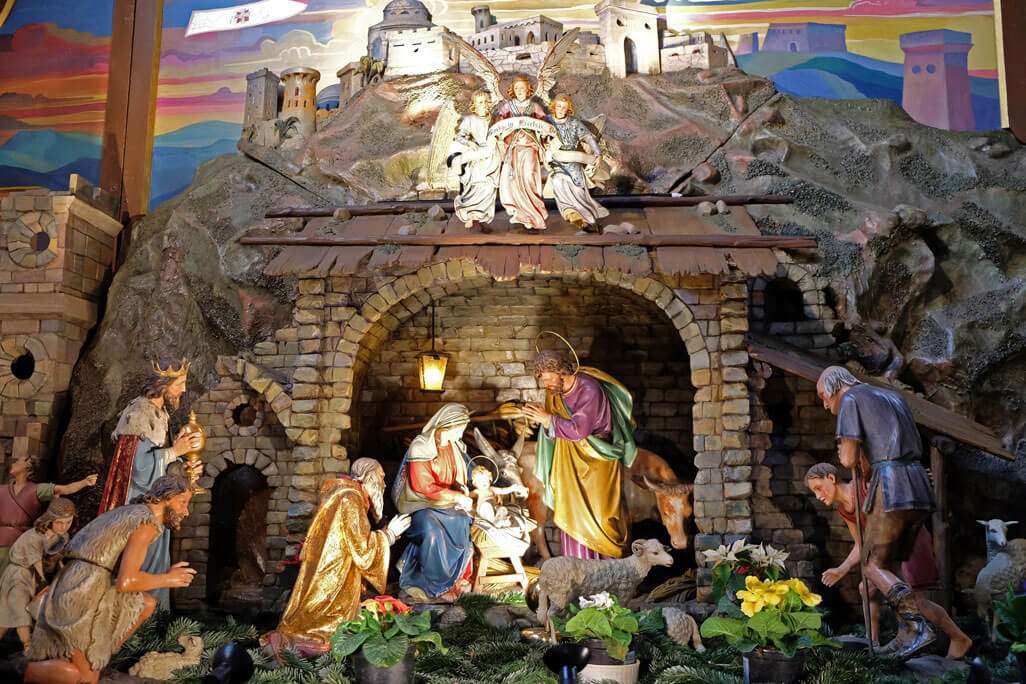 Centuries ago, in 1223, San Francesco (Saint Francis), the charismatic friar of Umbria, wanted to bring to life the story of  the birth of Baby Jesus. In the little town of Greccio, he placed a manger in some straw and added a living Madonna, San Giuseppe (St. Joseph), shepherds and actual cattle, sheep and donkeys, the animals that once warmed the infant with their breath.

Throughout Italy every church constructs a presepio (or presepe), including living crèches with real people and animals, ranging from simple to stunning. Some include hills,  trees, lakes, rivers, angels suspended by wires, the Christmas star and reproductions of an entire village or the countryside of Bethlehem, where Jesus was born. The straw-filled manger remains empty until the night of Natale.

Naples is most famous for its presepi, with hundreds of nativity scenes, including many with handmade or antique figures, set up around the city. Throughout the year artisans along San Gregorio Armeno create elaborate  figures of the traditional Nativity figures as well as of contemporary personalities.

In the past many families would go to the woods to gather moss and greens to serve as backdrop for their presepio. Today it’s possible to buy plastic figurines, fake grass  and entire miniature villages. However, the tradition of putting together a unique presepio remains strong.

One friend recalls the annual ritual of unpacking the box in which all the figurines were stored. His father would take out each shepherd, introduce him by name and tell a little story about his life and what he was doing on that magical night so long ago. Each of the children would do the same with the animals. Because the magi or wise men didn’t arrive in Bethlehem until January 6, the date of the Epiphany, the family would place the three kings at a distance from the presepio and move them, along with the star they followed, ever closer every day.

If you’re in Italy for the holidays, don’t miss a visit to the local presepi. In Rome you can find a huge presepio in St. Peter’s Square as well as other elaborate ones in the Piazza del Popolo, Santa Maria in Trastevere, Santa Maria d’Aracoeli and Piazza Navona. Throughout the year you can view presepi at two museums: Il Museo Nazionale di San Martino in Naples and Il Museo Tipologico Nazionale del Presepio in Rome.

So what do you get someone who can’t get enough of Italy all year round?  Conde Nast Traveler offers ten suggestions, including La Passione, which “surveys the touch points of Italian influence on Western culture, from Verdi on opera to DaVinci on painting to Armani on style and much more. Hales’ own love of Italy shines so brightly you’ll have no choice but to feel your own passion for Italy burning, too.” Read the entire article here.

← Christmas in Italy: Lucia, the Saint of Light and Sight Italian Christmas Traditions →
FOLLOW BY RSS