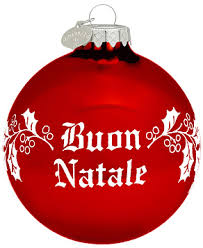 “Natale con i tuoi; Pasqua con chi vuoi,” Italians say. “Christmas with your family; Easter with whomever you want.” An Italian Christmas centers on casa (home) and stare insieme in famiglia (being together as a family). Here are some of the most beloved traditions among Italian families:

Italians in the northern part of the country began decorating alberi di Natale  after World War II, and the rest of the country has since embraced this tradition. In some places, families build a tree of light, a pyramid-shaped wooden frame several feet high with tiers of shelves decorated with colored banners and gilt pine cones. Often a Nativity scene (presepio) occupies the bottom shelf, with gifts of fruit, candy, and presents above, small candles fastened to the slanted sides, and a star or small doll hung at the top. In Sicily families make beautiful little altars, hung with green leaves and encircled by oranges, lemons, polished apples, pears, chestnuts, figs, and colored eggs.

Italian children, like American youngsters, write special letters at Christmas time. However, rather than simply requesting presents, they describe how good they’ve been at home and in school so Babbo Natale (Father Christmas) can evaluate whether they deserve the toys they want. A few weeks before Natale, with the help of their teachers (le maestre), children write their thoughts and express their love and appreciation for their parents on special paper (carta) decorated with lustrini d’oro e d’argento (gold and silver glitter) and figure meravigliose (marvelous figures). The children hide the letters in a tovagliolo (napkin) or under their father’s plate before il pranzo di Natale (the Christmas meal). Every year the father pretends to be amazed to find the letter and to read the children’s self-evaluation and thanks for i sacrifici (the sacrifices) the parents have made on their behalf. In some families the father reads the letterina aloud; in others the children do so.

This is the present Italian grown-ups most look forward to: a Christmas bonus usually consisting of another month’s salary (un’altra mensilità di stipendio), which is why it’s called “the thirteenth.” Regardless of whether the amount is modest or generous, the extra money creates a sense of abundance (abbondanza) that enhances the season’s celebrations.

Of all the good children.

Dianne Hales is the author of MONA LISA: A Life Discovered and LA BELLA LINGUA: My Love Affair with Italian, the