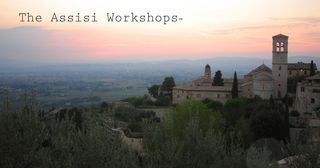 In this guest post, Wendy Murray, director of The Assisi Workshops and author of A Mended and Broken Heart, the Life and Love of Francis of Assisi, tells the back story of a town that millions visit but few get to know well.

Saint Francis' biographer and one-time mayor of Assisi, Arnaldo Fortini, posed the question: "Did Assisi determine Francis or visa-versa?" He then answered it: "St. Francis could only be born in a city like Assisi because only that place, that sky, that almost oriental peace, provided the possibility for his soul to fly toward its Creator." The small Italian hill town in the heart of Umbria was everything to Italy's patron saint, Saint Francis (1182-1226), who was born, lived, and died there.

Assisi was a feisty little warring town, ready to take up arms at the slightest provocation. By the time of Francis' birth in 1182, Assisi had been conquered by Rome, the Byzantine Empire, the Ostrogoths, the Lombards, and the Franks. Even so, the 14th century Italian poet Dante said of it: "Let him who talks of this place not say Ascesi which were to speak short." (Ascesi is an old spelling of the town, which means "I arose.")The town ought to be called "Orient, if he would speak properly," he wrote, since it is from the east that the sun rises. In Assisi, he says, a new light arose and cast a strange glow over a dark land.

When he was 16 (before his religious conversion), he and his fellow merchant-class warriors tore down the walls of the city's main high fortress above town, called La Rocca, and drove the nobles from their homes into exile, decisively repulsing entrenched feudalism.

Several years later, after savage warring and multiple illnesses had tempered him, he remained a man of stone—but no longer as one who tore down fortresses. Instead, he rebuilt three ruined churches, two of which are still standing.

The first is a small church just south of Assisi known as San Damiano. He labored with great joy, calling to passers-by: "Come and help me in the work of the church of San Damiano which was completed in a very short time. A few years later Clare of Assisi moved in, eventually joined by her sister and other women.

Francis promptly began work on two more ruined churches, one called San Pietro della Spina (now lost) and another called the Portiuncola, near San Damiano and the seat of the blossoming order. Today it remains intact, subsumed by the large edifice of the church of Santa Maria degli Angeli.

The great Basilica of Saint Francis, where the saint is buried, did not arise until four years after his death. The vicar of the Order at the time, Brother Elias, arranged for Francis' temporary burial at the church of San Giorgio (the present-day Basilica of Saint Clare) and started planning the erection of a great basilica to be the permanent resting place of Francis' mortal remains.

Construction began in March 1228 and advanced with incredible speed. The lower church was finished within twenty-two months. The following May, in a hurried, secret, and still unexplained change of plan, Elias orchestrated the secret transfer of Francis's body from San Giorgio to the basilica's lower church. The completion of the Upper Basilica, where Giotto's well-known Francis cycle is displayed, was finished in 1239.

The Assisi Workshops offer tours, retreats, workshops and seminars designed to open the door to a world of mystery, majesty, beauty and personal transformation. Click here for more information.