Coming Home to the Cradle of the Italian Language 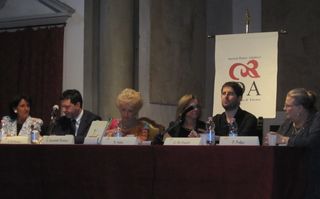 Five years ago I arrived in this Renaissance jewel of a city, not as a tourist, but as una studentessa di storia della lingua italiana (a student of the history of the Italian language). The setting was perfect: La Società Dante Alighieri  (called La Dante), housed in a converted fifteenth century cloister with beautifully restored frescoes on the courtyard walls.

My teacher, the vivacious Cristina Romanelli, had been a docent at a recent exhibit on  Italian’s history at the Uffizi. I remember secretly hoping that she would speak a little English. She didn’t, but Cristina provided so many audiovisual aids — illustrations of Roman graffiti, a page from an ancient grammar book, tapes of Italians speaking in various dialects — that the language came to life (la lingua si animò).

During the same period I visited the greatest bastion of the Italian language, l’Accademia della Crusca (literally the Academy of the Bran, because its esteemed members dedicated themselves to separating linguistic wheat from chaff). I turned the pages of its Vocabolario, the first compendium of officially recognized words in any language, and marveled at how many have survived to this day.

When my editors were searching for a title for my book on how Italian became Italian, I thought of Dante and the wordsmiths at La Crusca and suggested La Bella Lingua (the beautiful tongue). I never imagined that one day the Società Dante Alighieri in Florence would host a presentation in its honor.

Feeling un pò d’ansia (a bit of anxiety), I feared making uno strafalcione dietro l’altro (one terrible linguistic blunder after another) in front of Italy’s top linguists. In fact, I did wish that I had at least two sets of ears (due paia di orecchie)  to keep up with the waves of Italian words (parole)—sophisticated (raffinate), precise (precise) and very clever (molto argute).

When I first began what an Italian friend called the sfida audace (bold challenge) of writing a book on a language other than my own, I worried most about the reaction of Italians. And so the comments of gli illustri relatori (the illustrious presenters) meant the world to me.

Deputy Mayor Da Empoli said he could not imagine an Italian writing, as I had about Dante, that “it was dislike at first sight” (odio a prima vista). It amused him that I, like many an Italian child, had come to appreciate Dante by means of a comic book version of La Divina Commedia. Secondo lui (according to him), I also had succeeded in peering beyond Italy’s stereotyped beauties to discover la lingua dei sentimenti (the language of emotions) that reveals the Italian soul.

The Secretary General of La Crusca recalled my anecdote of slipping on the stairs the first time I visited the august academy. When a high-heeled shoe flew into the air, the ever-helpful press officer Paolo Belardinelli slid it back onto my foot. “I feel like Cinderella,” I said. “Cenerentola,” he translated. And now my friends at La Crusca think of me fondly as their Cinderella.

The moderator of the panel, the delightful Professoressa Gigliola Sacerdoti Mariani, confessed that she initially thought that reading my book would be “una perdita di tempo” (a waste of time). As an eminent academician and a native Florentine, she understandably assumed that she already knew everything there was to know about l’Italiano. But she found herself caught up in La Bella Lingua as she discovered new or forgotten details about the language.

Despite my insistence that I am not a studiosa (scholar), she declared that I had done so much research that I qualified as one, but more than anything else, she pronounced my book “uno spasso.” When I admitted that I did not know the meaning of the word, she explained that it dates back to the 1300s as a word for deep enjoyment. The Deputy Mayor whispered in my ear, “Your book is a lot of fun!”

Noting that the subtitle of my book is  My Love Affair with Italian, the World’s Most Enchanting Language, La Professoressa observed that a love affair requires two parties. Thanks to her, the other presenters, La Dante and the many Italians who believed in my book when it was just una bell’idea, during a magical homecoming in Florence, I felt truly ricambiata (loved in return).

LA BELLA LINGUA: MY LOVE AFFAIR WITH ITALIAN, THE WORLD’S MOST ENCHANTING LANGUAGE, is now available in paperback and in bookstores in Florence, including the Paperback Exchange and La Feltrinelli. Here is a photo I could not have imagined five years ago: signing copies of my book in la bella lingua's hometown. 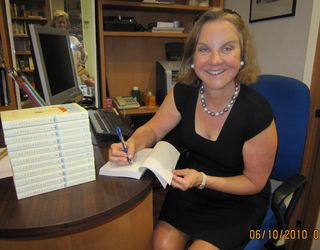