“D” Is for Dialetti in the Italian Language

Italy magazine, a British publication, has nominated "Becoming Italian Word by Word" as best blog on Italian art and culture. To vote, all you have to do is click here. Grazie! 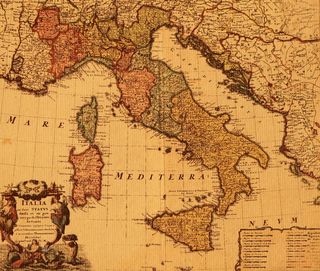 Years ago a friend in Assisi asked if I wanted to “marinare la scuola,” a phrase that literally means “marinate the school” but that translates as “play hooky.” In Rome, school children fanno sega; in Florence, fanno forca; in Naples, fanno filone; in Sardinia, fanno vela; in Sicily, fanno l’ora or fanno Sicilia. The sheer number of idioms for skipping school testifies, not only to a national penchant for truancy, but to how many mother tongues Italians speak.

Italy’s twenty official dialects derive from the Latin volgare (vernacular) so they are sisters more than daughters of Italian. Some, like Neapolitan (designated by UNESCO as a cultural treasure in need of preservation), Sicilian, Romanesco, and Venetian, are so complex and comprehensive that they qualify as true languages. Others are a blend of several tongues.

The Greek of its long-ago conquerors still echoes in the dialects of southern Italy. Logudorese, a dialect in remote central Sardinia, remains virtually unchanged from the Latin of 1500 years ago. The Marches dialect is clear and easy, like its people.

Even to an Italian ear, the high-pitched yelp of the northern city of Bergamo sounds like it crash-landed from another planet. Melodic Neapolitan  so vividly expresses deep feelings that a sentence sounds like a song. Venetian ripples with such a panoply of hues that a writer once translated Shakespeare into the local dialect because he considered Italian inadequately expressive.

According to Italy’s statistics bureau , 55 percent of Italians still use dialect some or most of the time when they are with family and friends. A quarter use dialect even when speaking to strangers. And so, depending on where you are in Italy, you might sit on a sedia, seggiola, or seggia and blow your nose into a fazzoletto, pezzuolo, or moccichino.

Bambino may be the proper Italian word for a small child, but a “kid” remains a bimbo in Florence, a cittino in Siena, a puteo in Venice, a figgeu in Liguria, a burdel in Romagna, a frut in Friuli, and a quatraro in some southern dialects.

Whatever they are called, Italian kids are cherished by their mothers. As a well-known Neapolitan saying puts it, “ogni scarrafon' è bello a mammà soja." “Every cockroach is beautiful in its mother’s eyes."

Tirrem innanz –- Milanese dialect for continuing onward despite difficulty, not giving up even though it’s hard.

Click below to hear native speakers demonstrate the difference a dialect makes: