Inside the Italian Renaissance: Money and the Beauty It Bought 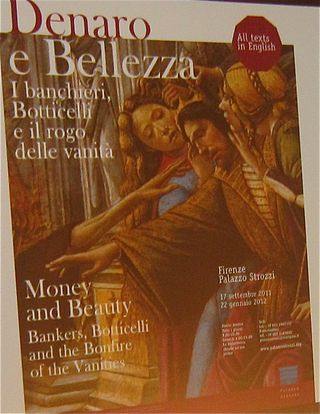 “Do you know the most beautiful thing Florence ever created?” a historian asked during my recent stay. As I began to list the obvious candidates, he interrupted. “No,” he said firmly. “Il fiorino.”

The city first coined “Messer Fiorino,” with the image of its patron saint, John the Baptist, on one side and the Florentine lily on the other, in 1252. Containing precisely 3.53 grams of 24-carat gold, the tiny coin quickly became the currency of Europe. The founding families of the Florentine banks, which loaned millions of florins to popes and princes, turned into medieval Midases.

Their fortunes funded the greatest flowering of art that Western Civilization has ever known. A dazzling exhibit at Palazzo Strozzi — Denaro e Bellezza: I banchieri, Botticelli e il rogo della vanità (Money and Beauty: Bankers, Botticelli and the Bonfire of the Vanities) — weaves together Florence’s financial and creative evolution.  The bottom line: No bankers, no Renaissance.

Items such as ledgers, strongboxes, coffers, keys, purses and an abacus (an ancestor of the computer) convey the history of commercial trade (la storia degli scambi commerciali) and the birth of the banking system (la nascita del sistema bancario). For money lenders and exchangers, money  provided luxury and pleasure for life on earth. However,  it also threatened their souls with eternal damnation for sins such as as avarice and usury (avarizia e usura).

“Wealth was seen as bringing with it immorality, greed and degeneration,” says art historian Ludovica Sebregondi, the exhibit’s co-curator (with author Tim Parks). No such stigma attached when money was transformed into beauty. And so rich Florentines invested in works of art (opere d’arte) by Botticelli, Beato Angelico and other masters of the Renaissance.

Assembled from major museums and private collections from around the world, the hundred or so paintings and sculptures provide a true picture of the life and of the European economy (una vera fotografia della vita e dell'economia europea) from the Middle Ages to the Renaissance.

The show spans the period from the mid-thirteenth century, when the florin was first coined, to the emergence of Savonarola, the monk who denounced those with “homes full of vanities, dishonest images and wicked books.” His influence on the artist Sandro Botticelli is seen in a series of works that range from radiant Madonnas to an alluring nude Venus to the stunning allegorical painting “The Calumny of Apelles” (In the poster above). Sebregondi describes it as “somewhat of a farewell to the Florence of Lorenzo the Magnificent.”

With Italy in the midst of an economic crisis that threatens the future of the euro, created to unite European currencies as the florin once did, the timely topic has attracted a great deal of international attention and acclaim.  The  exhibit continues until January 22, 2012.  Click here for information on times and tickets.

If you can’t get to Florence, the video below provides a wonderful overview—whether or not you can understand the Italian commentary.