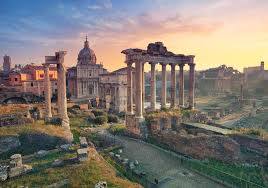 Some of Rome’s masterpieces come on strong. Who can resist the rakish ambush of Caravaggio? Who isn’t swept off his feet by the might of the Coliseum? The Pantheon, the Trevi Fountain and the Spanish Steps are all awe-inspiring monuments with the knowing countenance of having seen many a lover come and go. From Dante to Dickens, from Leonardo to Liszt, the city has beckoned visitors into a whirlwind of torrid affairs that rival those penned by Catullus, Lord Byron and Edith Wharton. The breathless trysts—a half day here, a few hours there–might leave the inexperienced tourist overwhelmed  or, worse yet, lead to that awful phrase, “I’ve done the Coliseum”– much like a university student  might dismiss a drunken conquest.

Rome is, in its own way, a femme fatale. After all, she was founded by the line of Venus (Aphrodite in Greek), the goddess of love. At times she is fickle, moving from the arms of Mars to those of Vulcan and Anchisis; at times trouble-making, provoking the Trojan war; and at other times “merely” interfering, derailing the chaste dreams of lads and maidens. But she is always powerful.

Julius Caesar claimed descent from her exalted DNA when he constructed the Temple to Venus Genetrix in his new Forum. Roma, spelled backwards, reads amor, the Latin word for love, the purview of this deity of many epithets — from “lover of laughter” to “mother of love.”

Greek mythology gave us the Venus of tempestuous one-night stands, but Botticelli and his Renaissance peers suggested that the volatile goddess of desire could transform into the fecund mistress of faithful love. In Rome, the lusty conquests of the major sites evolve into abiding love when the ardent tourist learns the hidden mysteries of the Eternal City — its quirky corners and secret sites, but mostly its innermost virtues.

This is how natives and visitors alike grow from besotted paramours into steady spouses, who, undaunted by graffiti, grime or erratic garbage collection, take Rome into their souls. After having been seduced by the grandeur of Michelangelo and the genius of Bernini, they nestle into pillow talk in the more intimate sites of the Eternal City. The mysteries of Via Appia with its tombs and testimonies, the shrines and stories of Tiber Island, the intrigues and intricacies of princely palazzi are what ultimately woo the Rome-lover to “put a ring on it.”

Masters’ Gallery Rome is, in its own way, also a labor of love. Born not only from the passion of a team of Roman tour guides for their native (or adopted) city, but also from the fervent desire to inspire that love in others who, at least for now, don’t have a chance to experience the seduction of the Eternal City in person. Masters’ Gallery Rome offers online courses, with videos featuring Rome’s best guides, edited with great footage, important facts and humorous surprises to recreate the sparkle of learning about Rome.  We also host weekly web lectures where the Masters share a favorite site or area of study, as well as a bimonthly newsletter, all intended to bring Rome to your home.

Dante gives these words to his adored Beatrice: “Amor mi mosse, che mi fa parlare …” (Love moves me and makes me speak).  It is our abiding love that has impelled us to act and to speak about the wonders and beauties of Rome.

We invite you to learn about Roman masterpieces from masters in the field. Click here to meet our faculty and join us on a virtual tour of Rome through our videos and webinars.

Elizabeth Lev, the founder of Masters’ Gallery Rome, is a transplanted U.S. art historian with degrees from the University of Chicago and the University of Bologna. She has been working as a guide in Rome for more than 20 years.

Dianne Hales is the author of  LA PASSIONE: How Italy Seduced the World; LA BELLA LINGUA: My Love Affair with Italian, the World’s Most Enchanting Language; and MONA LISA: A Life Discovered. Her new book, “A” Is for Amore, is available to download free at diannehales.com.