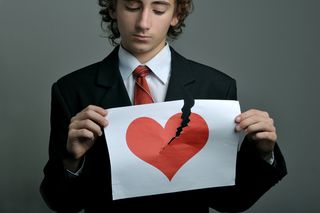 The Rules for Italian-English

“How do you say ‘love affair’ in Italian?” I asked a group of friends in Rome as I struggled to translate the subtitle of my book La Bella Lingua: My Love Affair with Italian, the World’s Most Enchanting Language. The innocent question sparked an intense debate.

“Avventura,” one woman suggested. “Scappatella,” said another. No, said her husband, explaining that these words imply a casual sexual fling. Infatuazione was deemed too superficial, passione too generic, storia d’amore too trite. Finally a distinguished professor declared, “Diremmo un ‘love affair.’” (We would say a 'love affair.')

I was stunned. English, the world’s most utilitarian language, has infiltrated many realms of Italian life. But are English words now replacing parole d’amore in the most romantic of tongues?

“Basta!” (Enough!) Agostini Associati, an Italian translation agency, has declared. Under the slogan of “Italiano, ti amo ancora!” (Italian, I still love you!)  the translators have launched a campaign against the mixing and mangling of l’italiano and l’inglese into “Itanglese.”

In order to “arginare l’avanzata degli anglicismi” (stem the advance of anglicisms), the agency has created una piccola guida (a little guide) that it calls “il Codice Itanglese,” the Itanglese Code—a set of rules for the appropriate use of English terms.

According to these commandments, thou shalt NOT use an English word:

*when only trying per apparire più moderni e tecnologicamente avanzati (to appear more modern or advanced technologically). Rather than going online, in Italian you should go in rete (on the net) to check for posta elettronica (e-mail) or scaricare (download) a file. But why even consider a humdrum English word like "hacker" when you can stick with the far more dashing pirata informatico (information pirate)?

*when you are suffering la pigrizia di non volerlo tradurre dall’originale (the laziness of not wanting to translate it  from the original). Resist such temptations as opting for weekend instead of fine settimana, ok! for bene!, no smoking for vietato fumare, hobby  for passatempo  or chewing gum for gomma da masticare.

*when English words might rovinare l’equilibrio grammaticale e di sintassi del resto della frase (ruin the grammar or syntax of the rest of the phrase). There’s something jarring about phrases (ubiquitous on signs in Italy) such as “il pranzo business” (business lunch) or il negozio fashion (fashion shop).

*when the original meaning of the English term changes in the Italian. The Italian word ticket, for instance, translates as a medical copayment, not as a biglietto for a museum or movie. In Italian golf refers to a pullover sweater, mobbing to bullying or harassment in workplaces and slip to women’s underpants, not to a slip of the tongue (although it certainly would be).

*when the origin of the English word is Latin. Honor a word’s roots, and say centro rather than center, fanatico rather than fan, supermercato rather than supermarket and esamo instead of test.

If you find these rules confusing or hard to follow, you can complain about a condition that has no equivalent in the Italian language: lo stress.

Dianne Hales is author of LA BELLA LINGUA: My Love Affair with Italian, the World’s Most Enchanting Language, now available in paperback.