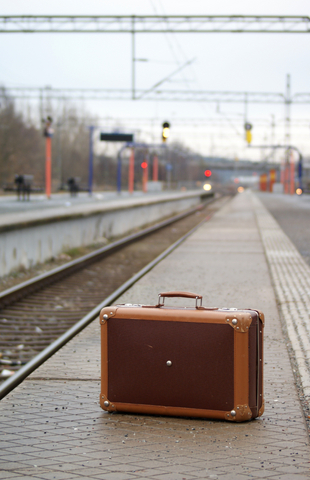 When I arrived in Italy for the first time in 1983 I knew only one Italian sentence: “Mi dispiace, ma non parlo italiano” (“I’m sorry, but I don’t speak Italian”). In my first minutes in the country, I repeated it half a dozen times, with ever-mounting panic in my voice, interspersed with pleas of “Stop this train!” Other passengers responded with concerned looks and torrents of incomprehensible Italian. Only the weary conductor followed my gaze as I pointed to my forlorn brown suitcase, which the porter had left behind on the platform in Domodossola.

“Sì.” I nodded, frantic that I would never be reunited with it again.“Non c’è problema,” he announced loudly.

Settling into my seat, I rolled the melodious syllables around my mouth. Yes, as soon as I arrived in Milan, I would find Signor Domani Mattina, and he would somehow retrieve my bag.

In the colossal bleakness of the Milan station, I threaded my way down massive stone staircases. Late on a Sunday afternoon, everything was closed. I rushed to a man in a blue custodial uniform and entreated, “Signor Domani Mattina?”

“No, signorina,” he said, looking confused. I whipped out my pocket English- Italian dictionary to find the Italian word for “where,” which I mispronounced as if it were the English name of a gentle white bird: “Dove?”

“Doh-VAY!” he boomed before breaking into laughter. “No, signorina, the day after today. Domani mattina.”

My quest for the quixotic “Mr. Tomorrow Morning” launched my journey into the Italian language. Throughout that first semi-silent excursion in Italy, I delighted in the beauty of what I saw, but I craved comprehension of what I heard. I wanted to understand the waiter’s quip when he set down my cappuccino, the barzelletta (funny story) the shopkeeper told with a wink, the verbal embraces couples exchanged as they strolled at twilight. And so, unlike Italophiles who trek through frescoed churches or restore rustic farmhouses, I chose to inhabit the language, as bawdy as it is beautiful, as zesty a linguistic stew as the peppery puttanesca sauce named for Italy’s notorious ladies of the night.*

You can read more of my adventures in Italian in my new book, La Bella Lingua: My Love Affair with Italian, the World’s Most Enchanting Language, which will be published by Broadway Books on May 12. I will be posting brief excerpts in this week’s blogs and Chapter 1 in its entirety on my website (www.becomingitalian.com) next week. I hope you find them divertente (amusing). 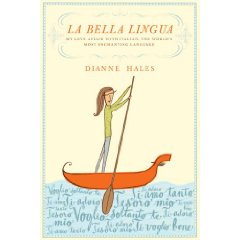 dall’oggi al domani – from one day to the next, immediately, without notice

Il mattino ha l’oro in bocca – Morning has gold in its mouth. (Any job is done better early in the morning.)

“Il buon giorno si vede dal mattino” – You can spot a good day from the morning.

*From the book LA BELLA LINGUA by Dianne Hales, published by Broadway Books, a division of Random House, Inc. Reprinted with permission.