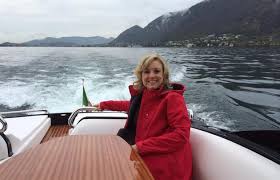 How Kathy McCabe Made Her Italian Dreams Come True

Many of us dream of Italy. Kathy McCabe transformed her Italian dreams into an award-winning newsletter and a PBS travel series.

Blonde-haired McCabe doesn’t look Italian—nor does her name sound Italian. But the first time she visited her great-grandfather’s village in Campania, McCabe felt that she had come home. “When I was growing up in New Jersey, I spent a lot of time with my maternal grandparents—both children of Italian immigrants. They had a great love for family, food and Italy, and when I went to Italy, I felt that I was with them again.”

Her grandfather’s longtime dream was to visit the small town his father had left in the late 1800s. In 1995 McCabe and her mother fulfilled his wish by traveling to Castelvetere, a town of about 1,000 people an hour from Naples.

“We were the only blondes and the only American women at our hotel,” McCabe recalls. Armed with a list of residents with the same last name as her grandfather's parents—Nargi—they knocked on doors until they found two cousins. Manfredo and Livio Nargi invited them into their homes, showed them the local churches and cemetery and took them to the town hall, where they found her great-grandfather’s birth certificate. “It was like a scene from Brigadoon. The town seemed to come magically to life for one special day.”

Back at work as a broadcast journalist at ABC news, McCabe never forgot Italy's magic. “I kept going back almost very year. I realized that a lot of people felt the same way—some because of their Italian blood and others because they’d fallen in love with the country."  In 2002, while working as a travel editor at USA Today, she launched a print and digital newsletter highlighting the best of Italy. Other than a designer and part-time help, Dream of Italy has been a one-woman show ever since.

“I feel like I’ve 140 children,” says McCabe, who publishes ten issues annually. “You can’t do something for 14 years without  being really committed. The newsletter has been my passion, first and foremost. It’s been a constant that’s given me a purpose, no matter what else was going on in my life. ”

Because of her extensive broadcasting experience, McCabe always saw the possibilities of a television series. Last year six episodes of Dream of Italy debuted on PBS. (Click here to watch  online.)  Each show highlights a different region, but she describes it as “more of a documentary than a how-to travel show,” with a strong emphasis on face-to-face experiences with local Italians. In Piedmont, McCabe hunted for truffles with “two adorable brothers.” In Rome she studied mosaic-making. In Naples, she learned to dance the pizzica.

Still in the planning stages, the second season, scheduled for late 2017, has two definite episodes. In one, McCabe  traces her own genealogical search for her ancestors. “I discovered that one was a Norman invader from a region that’s now part of Germany. That explains my fair coloring.”

Another  features Francis Ford Coppolla, who, like McCabe, first unearthed his Italian roots in his twenties. He kept returning to Bernalda, a small town in Basilicatta that was his grandfather's birthplace and home. In 2004 Coppola bought the 19th-century Palazzo Margherita, which he converted into a luxury hotel to attract more visitors to the stunning but largely unknown region.

In an elegant salon, guests can view movies from Coppolla’s collection of favorite films. As she watched Christ Stopped at Eboli, based on Carlo Levi's book about the bleak poverty of Basilicata, McCabe reflected on an almost dream-like coincidence: The great grand-daughter of poor immigrants was sitting in an exquisitely restored hotel created by another descendant of impoverished Italians and  watching a film about the most wretched of Italy’s poor.

How have Italians responded to her venture? “They’re tickled pink. They can’t believe how long I’ve been doing it or how many people want to learn more about their country. I think that what they’re really responding to—both in the newsletter and the series—is how much I love Italy and Italians.”

McCabe doubts that feeling will ever change. “I’ve always loved Italy, but when we are shooting episodes, I fall in love with it over again.”

Dianne Hales is the author of La Bella Lingua: My Love Affair with Italian, the World's Most Enchanting Language and Mona Lisa: A Life Discovered. She contributes regularly to L'Italo-Americano, where this article originally appeared.