“E” Is for “Espresso” in the Italian Language 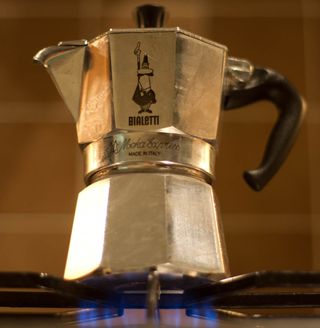 According to legend, some Ethiopian goats discovered coffee. One night a shepherd noticed that his goats, even the older ones, were jumping and leaping. Upon investigation, he realized that they had been eating the red berries of a local shrub. He sampled the berries himself and shared them with friends, who tried roasting them and immersing them in hot water.

The Arabs called the drink qahwah, suggesting something stimulating and exciting. The Turks transformed this to quahve. Around 1450 the first coffee shops opened in Constantinople. In 1638 specialty shops in Venice began serving kahavé made from Arabian “seeds.” Venetians flocked to these caffè to meet friends, gamble — and flirt. Soon so many illegitimate babies flooded orphanages that the state banned women from entering a caffè.

The machines used to make coffee have a different history. In 1901 Luigi Bezzera, a Milan businessman, wanted to cut the time his employees spent brewing coffee. And so he invented a macchina espresso (fast machine), which produced an individual cup of coffee in mere seconds. After going broke trying to market his newfangled coffee maker, Bezzera sold the patent in 1905 for the equivalent of $8 to Desiderio Pavoni, who set up kiosks selling “la Pavoni-Caffè Espresso” across the country. The Italian coffee “bar” was born.

About thirty years later an engineer named Alfonso Bialetti was watching his wife do laundry. As boiling soapy water percolated upward through the primitive washing machine, Bialetti wondered. What if the same process pushed boiling water through ground coffee? His aluminum stovetop espresso machine, known as the Moka, made its way into almost every Italian kitchen. Its mascot — l’omino coi baffi (the little mustachioed man), a caricature of Bialetti — remains a national icon.

Every morning in Italy I begin my day the same way millions of Italians do: making espresso in a caffettiera (coffee pot). The steps are always the same: pouring water into the bottom half of the coffeepot (la caldaia), inserting the flavorful grounds (polvere odorosa) into the filter, screwing on the top (l’avvitamento), turning on the flame (l’accensione) and waiting for the characteristic gurgling (l’attesa del caratteristico borboglio).

Then come the little pleasures of the intense smell (il profumo intenso), the tinkling of the spoon that mixes the sugar in the cup (il tintinnio del cucchiaino che mescola lo zucchero nella tazza), the tasting in slow sips (la degustazione a sorsi lenti)). Aaaah! Can there be a better way to start a day (cominciare il giorno)?

An Italian never asks for an espresso. Instead it’s “un caffé, per favore.” This is one shot of espresso in a tiny cup, usually corto (short), with a lovely head of light brown crema (or schiuma).Other options include:

*cappuccino – espresso infused with steamed milk, drunk  only in the morning

*caffè corretto –- espresso with a drop of anise liquor or grappa

Dianne Hales is the author of LA BELLA LINGUA: My Love Affair with Italian, the World's Most Enchanting Language and MONA LISA: A LIfe Discovered.

Click below for a lesson on brewing espresso at home: