Easter in Sicily: The Passion of Christ 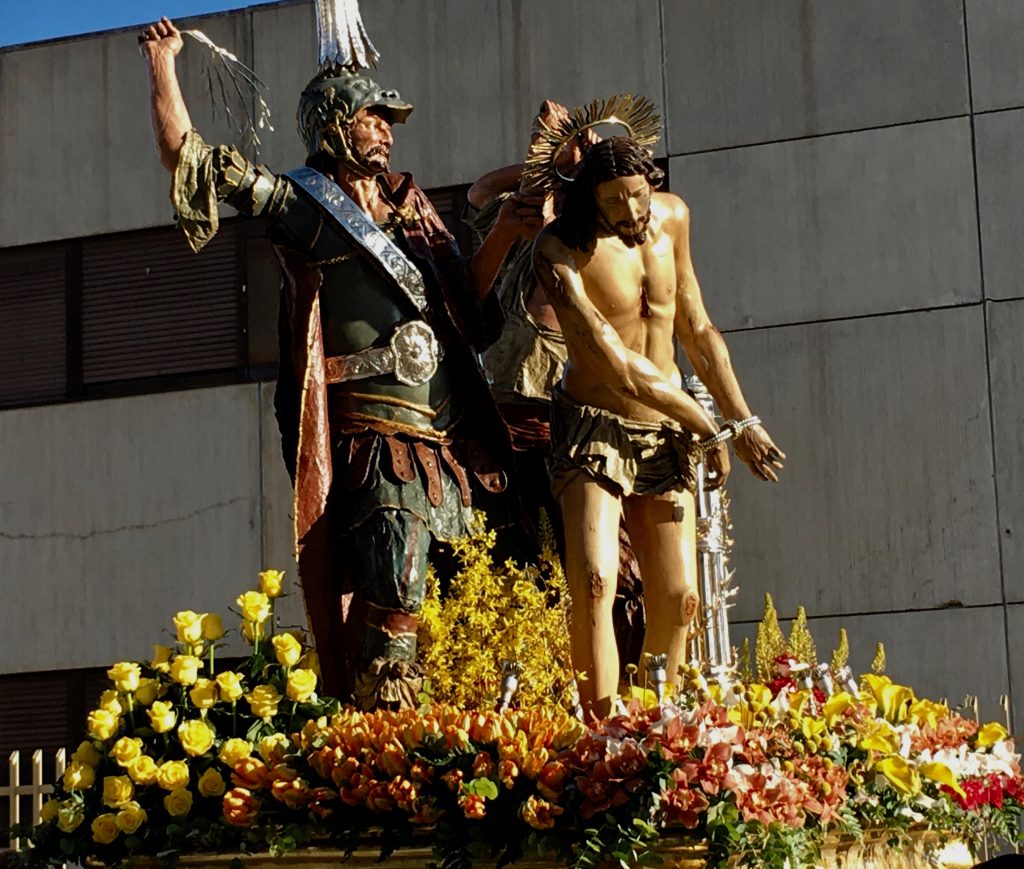 Passion Sunday, the fifth Sunday of Lent, marks the beginning of a two-week period sometimes called Passiontide.  The early Christians fashioned the word passio from passus, the past participle of the Latin for “suffer.”  I never fully comprehended this meaning until I went to Sicily for Holy Week.

Every  year the ancient port of Trapani brings the Passion of Christ to life in La Festa dei Misteri (the Feast of the Mysteries). Over the course of twenty-four hours, a parade of massive altars, each depicting a scene of Christ’s final days, winds through the town’s narrow streets. The altars, fashioned in elaborate detail in the seventeenth and eighteenth centuries, have survived floods, fires, and Allied bombings in World War II. 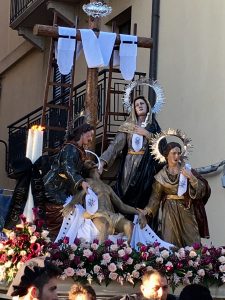 Squads of muscular men grasp one another’s shoulders, pressing close into a crosshatch of intertwined arms as they hoist each tableau aloft. Sweating and grimacing, they weave in a wavelike rhythm called the annacata, stepping forward and back and side to side. Two white-haired widows standing next to me provide a running commentary. The men move like the sea, surging in and out with the tides, one explains. The other insists that the rhythmic dance started because the porters drank so much along the route that they staggered, dropping an altar on more than one occasion.

As day darkens into dusk, I find myself swept into the procession. When I try to break away, I hear voices calling “Guarda! Guarda! Guarda!” (Look! Look! Look!). Just turning a corner, a little girl, caped in black, leads dozens of mournful women carrying candles and rosaries. 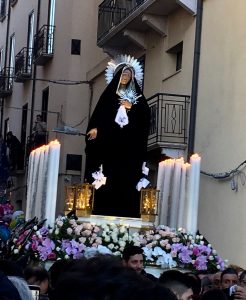 Inching its way behind them is yet another altar with a single regal statue: La Madonna Addolorata, the sorrowful mother of Christ, draped in velvet robes. A silver heart gleams in her chest. Above it—suddenly lit by a ray of the setting sun—flashes a sword. This is a Sicilian mother, stabbed by grief for her beloved child yet standing strong and resolute. Finally, on Holy Saturday, the altars make  their way back inside their home church.  The parish priest gives thanks to the people of Trapani—for their labor, their time, and, above all, their inspiring passion. 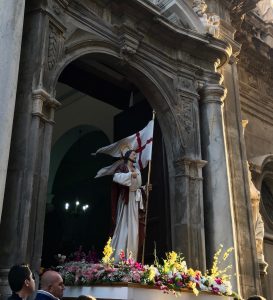 On Easter, I once again hear a marching band and rush outdoors. At the end of a sun-dappled street, I behold an altar with the risen Christ, tall and triumphant, surrounded by lilies, carried by a fresh crew of burly porters. The crowd cheers. Steeple bells ring. I breathe in the scent of spring flowers and candle smoke. The faces around me glow with jubilation. When I join the parishioners admiring the altars on display, a young priest  asks what I thought of the procession.

“Bellissimo,” I say, adding that I am touched to see such beauty inspired by such pain and sorrow. 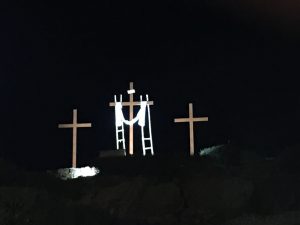 “No, signora,” he says gently. “You are mistaken. It is not suffering that we celebrate in the Passion of Christ. It is love.”

Indeed it is: the great love that conquered the empire that had conquered the world and gave rise to the largest religion in history. And it is love that we find at heart of every Italian passion.

Dianne Hales is the author of LA BELLA LINGUA: My Love Affair with Italian, the World’s Most Enchanting Language, MONA LISA: A Life Discovered, and the upcoming LA PASSIONE: How Italy  Seduced the World. For more information on her and her Spring book tour, visit her website: diannehales.com.